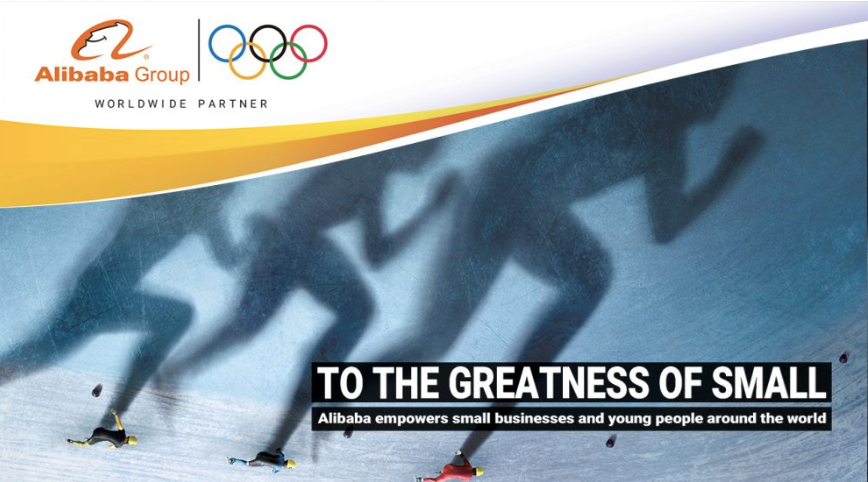 The campaign, “To the Greatness of Small,” features three commercials that illustrate how one small action can touch millions of people, how small moments of character can inspire the world, and how the underdog can achieve great things.

“Since our founding 19 years ago, Alibaba Group has believed in and embraced the greatness of small in everything we do,” said Alibaba Group Chief Marketing Officer Chris Tung. “Through this campaign we can share the story of what Alibaba has stood for from day one, which is to support the small guy and leverage our technology to help the underdog succeed in the global marketplace. We believe that technology can level the playing field, and that even small companies have the opportunity to be global companies.”

The cornerstone “manifesto” commercial, is an ode to the power of small, showing that every action, regardless of size, has the ability to make a great difference. The spot features a pint-sized hockey player flattening a much larger one and a tiny woman boxer whose fearsome punching prowess will have even Ronda Rousey quaking in her boots.

Watch: Alibaba’s advertisement on “to the greatness of small.”

“A small character has unrivaled power,” the narrator intones. “A small corner can impact the whole world. A small country’s story can inspire all humanity. From big to small, everyone is making a difference. Alibaba Group, together with the Olympic Games, gives everyone an equal chance. To the greatness of small.”

The “To the greatness of small” manifesto ad will air in China on television, online and outdoor, in Korea outdoor, and online in the United States, Japan and the United Kingdom. It is accompanied by two athlete-inspired spots. Tung said the company looked at hundreds of sports and Olympic-themed stories that underscore the company’s beliefs and mission.

The first features an ice hockey team from Kenya with grand aspirations to one day qualify for the Olympic Winter Games. The ad opens with a young Kenyan boy who has never played hockey ¬≠¬≠- or even seen ice, for that matter – telling a skeptical elder he’s going to be an ice hockey player. “Forget it, we don’t play ice hockey in Africa,” he is told. We see him taking to roller blades, then, joined by others, learning stick- and puck-handling on a dusty street hockey court. Their journey takes them onto the ice, as a team, but it’s a local rink, and it leaves the date of their Olympic debut as TBD – still just a dream. Text on the screen reads: “We believe great dreams start small. To the Greatness of Small. Kenya’s first amateur ice hockey teams looks forward to their first Olympic Games.”

To help bring the amateur ice hockey team one step closer to their Olympic dream, Alibaba will bring five members of the team to the Olympic Winter Games Pyeongchang 2018 to experience the Games firsthand. Additionally, Alibaba will support the team with equipment and access to training facilities.

The final commercial features the story of Australian sculler Henry Pearce. During the quarterfinals of the Olympic Games Amsterdam 1928, he displayed a small act of kindness, pausing midrace to let a mother duck and her ducklings pass without losing a feather. Oars back in the water, Pearce caught and passed his French opponent. Pearce not only won hearts of the crowd for his act of courage, but went on to win a gold medal and to set a new world record in the 2,000 meter event that would stand for 45 years. Onscreen: “We believe small acts lead to greatness. To the greatness of small.”

According to Tung, “To the Greatness of Small” harks back to Alibaba’s founding in 1999. The first company Jack Ma and his fellow founders built was Alibaba.com to help small businesses in China export their best products to the world. Then came Taobao – the largest online marketplace in the world, home to millions of small merchants who started businesses and built brands fulfill their own dreams. There are millions of people selling and half a billion people shopping on our platforms today. We have a vision to make it possible for any small business to be able to sell to consumers anywhere in the world, seamlessly,” said Tung.

“Our approach has a lot of in common with the Olympic Games. Before the Games start, every athlete comes in as an equal. Every athlete has a chance to compete and win on this global stage. We believe our mission aligns perfectly with the Olympic spirit. That’s the message we want everyone to hear, loud and clear, from us during the Games.”

In January 2017, Alibaba Group and the International Olympic Committee jointly announced a longterm, strategic partnership. Alibaba was the first partner to make a longterm commitment to the IOC through 2028. As part of The Olympic Partners worldwide partnership program, Hangzhou-headquartered Alibaba Group became the official “Cloud Services” and “E-Commerce Platform Services” Partner for the Games.

As part of the partnership, Alibaba will provide cloud-computing infrastructure and services to help transform the Games for the digital era. On the e-commerce front, Alibaba will create a global platform for Olympic stakeholders to engage and connect with fans seeking official Olympic-licensed products.