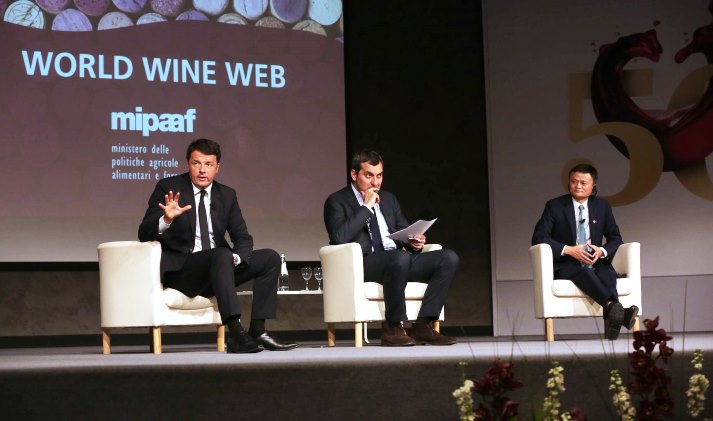 Italian Wine: Marco Polo introduced China to Italy, but no one introduced Italy to China.So said Jack Maon Monday during a public forum with Italian Prime Minister Matteo Renzi at Vinitaly, the world’s largest wine expo, which is held each year in the country’s northern city of Verona.

Well, that’s where Alibaba comes in.

The e-commerce giant has announced plans to bring tens of thousands of wines, many of them Italian, to millions of Chinese consumers through a new online shopping event, the Tmall Wine & Spirits Festival, to be held this coming Sept. 9.Ma, Alibaba’s executive chairman, said the festival would give Italian vintners the chance to join the company’s e-commerce platforms to reach a Chinese market increasingly thirsty for fine wines.

“Alibaba wants to be the gateway to China for Italian brands and small businesses,” Ma said, adding that Alibaba offers vintners not just an online sales platform but also shipping, export logistics and marketing solutions for overseas merchants.

Expertise and support may be essential for Italy’s winemakers, many of them small, family-owned businesses that have yet to tap the Chinese market. According to Reuters, exports to China make up just a fraction of Italy’s wine exports: Last year, China exports accounted for just $99.2 million worth of Italy’s $6.2 billion in overseas sales.

So far wine has been popular largely among China’s wealthy elite but middle class consumers havestarted to catch on, too. Both groups seem to increasingly prefer to have their vino imported. Research from Vinexpo showed that imports were up in the first three quarters of 2015 while sales of China’s domestic wines slowed in tandem with its economy.

Ma said that China is on track to have 500 million upper to middle class consumers over the coming decade, all of whom will seek out high-quality, international products such as those coming from Italy.

“Because of the internet, the world has changed. You cannot wait for your customers to come to you, you must reach them where they are,” Ma said. “And you will find Chinese consumers online.”

The Tmall Wine & Spirits Festival will be preceded by a promotion of “Made in Italy” products on Tmall from June 1-4 to further highlight the Italian products available to Chinese consumers. So far Tmall hosts more than 90 Italian brands, including Coop, Barilla, Ferrero, Fiat, Luxottica, La Perla and Maserati, among others.