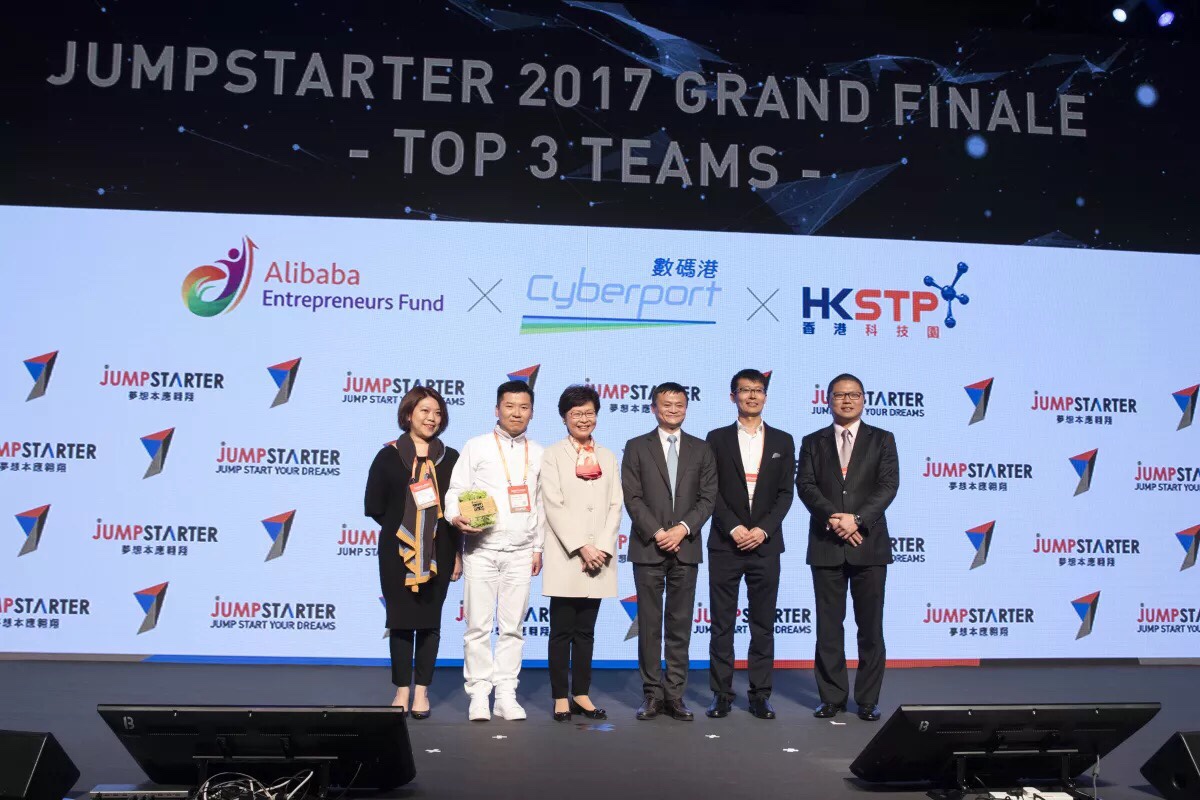 Three Hong Kong-based startups on Tuesday each won up to US$1 million in investment from the Alibaba Hong Kong Entrepreneurs Fund’s Jumpstarter competition.

At the half-day Grand Finale, the Hong Kong Convention and Exhibition Center was transformed into a hub of creativity and innovative ideas. Competing entrepreneurs pitched their business plans in front of an audience of about 1500 people, and prominent judges, including Lan Kwai Fong Group founder Allan Zeman and Senior Director of Innovation at CLP Holdings Austin Bryan. Alibaba Executive Vice Chairman Joe Tsai was also on the judging panel.

“The pitches were great. [The competition] reminds me of 18 years ago, when we were raising money. Unfortunately, we were rejected by all the venture capitalists,” said Alibaba Founder Jack Ma to the audience just ahead of the announcement of the winners. Ma held a fireside chat with Hong Kong Chief Executive Carrie Lam, sharing his experiences and struggles from his early entrepreneurial days.

“We didn’t care about what people said. We were thinking of the future, and how it would help people. My advice [to entrepreneurs] is ‘don’t follow what’s hot.’ Be unique, and think about what makes you better, why you will last for ten years, while others can only last for one.” said Ma. “The last man standing.”

The Jumpstarter competition, co-created by the Fund and Hong Kong’s two leading, government-supported incubators—Cyberport and Hong Kong Science and Technology Parks—is in line with Ma’s vision of enabling entrepreneurs around the world by leveraging Alibaba’s existing resources and ecosystem.

Ma said a main reason Hong Kong has been successful in the past 50 years is it’s an open-minded society that accommodates a mix of cultures. “The young people of Hong Kong, do not focus your eyes only on Hong Kong, but other parts of China, and globally— Europe, America —anywhere that has opportunities.”

“The mission of the Fund is to help Hong Kong entrepreneurs to realize their dreams so that their innovations and ideas can be relevant not only in Hong Kong, but globally,” said Alibaba Executive Vice Chairman Joe Tsai.

In addition to capital, the three finalists are promised technical training, mentorship and networking opportunities from Alibaba in the coming months to help them turn their ideas into reality.

Tayler Holland, who co-founded one of the winning startups En-Trak, said choosing Hong Kong as a base was a no-brainer for him because of the city’s convenience, proximity to the China market and the large pool of multilingual talents.

Holland added participating in the competition was a valuable experience. He said his company benefited from step-by-step coaching provided by industry leaders.

“It is awesome to get advice and suggestions from the mouths of experts,” he said.

Alibaba established the Hong Kong Entrepreneurs Fund in 2015. The not-for-profit initiative was set up to help Hong Kong entrepreneurs “realize their dreams and visions for a Hong Kong that is vibrant and engaged regionally and globally.” It does so through two avenues: providing business founders access to investment capital and mentorship, as well as offering fresh graduates and final year university students a six-month internship at Alibaba or its related companies.

To date, the Fund has invested in 14 startups, spanning e-commerce, O2O, fintech, healthcare, wearables, the sharing economy, media sectors and VR entertainment, including Shopline, which provides online tools to e-commerce vendors, designer dress-rental platform YEECHOO, logistics service GoGoVan, online recipe hub DayDayCook and genetic-testing startup Prenetics. All of the profits from these investments are put back into the Fund for additional investments.

The Chinese tech giant has deep ties with Hong Kong. Some of its origins lie in the market, with B2B unit Alibaba.com, having had a share listing on the Hong Kong Exchange for several years before the group’s market debut in the U.S. in 2014. Alibaba has since been active in the Hong Kong’s startup space, working closely with local incubators and universities to foster talent and supporting budding entrepreneurs.