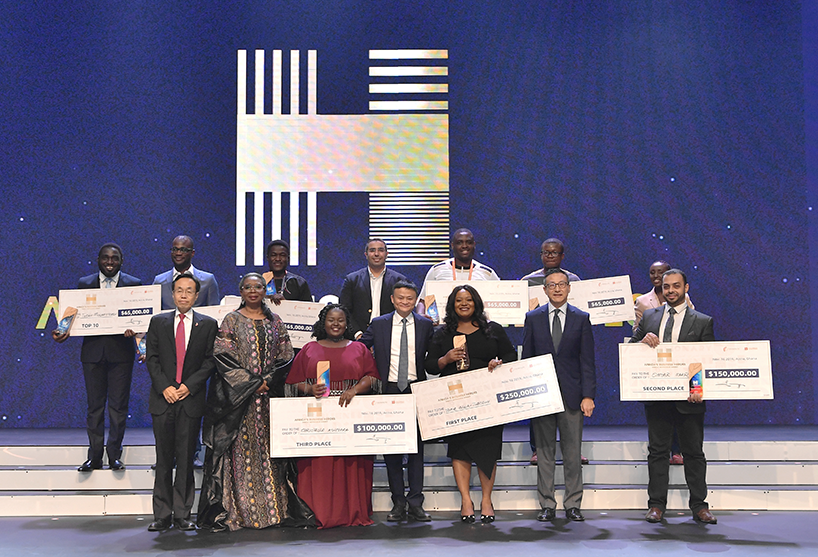 Giwa-Tubosun pitched her way to a $250,000 cash prize over the course of eight months, beating out about 10,000 other applicants from 50 of Africa’s 54 countries to be named “Africa’s Business Hero.” While the entries were whittled down to a semifinal round of 20 and then the final 10, who came to the Ghanaian capital this week to make their final pitches to four judges – including Ma – in front of a television audience, Giwa-Tubosun’s focus on building an efficient delivery network for critical medical products stood out.

“It was an incredible honor to be named Africa’s Business Hero. I was truly inspired by my fellow winners at today’s Netpreneur Summit. The Africa Netpreneur Prize will give me the resources to grow LifeBank and expand our presence in Nigeria and throughout the rest of Africa. I look forward to continuing my journey to solve problems and make a significant impact on the future of Africa,” she said.

Giwa-Tubosun decided to launch LifeBank after a difficult child birth while visiting her parents in the U.S., in 2014. A postpartum hemorrhage caused extensive blood loss, a condition that may have killed her in her native Nigeria. That realization prompted her to build a business that would deliver blood – as well as oxygen, platelets, plasma and vaccines – to hospitals to help reduce these risks for other patients.

“LifeBank is really about delivering critical medical supplies when they’re needed. We like to say that we stand in between death and quite a lot of people in Nigeria,” she said. “So, this [prize] is just validation for the critical work that we do.”

Ma was inspired to create the contest during his first trip to Africa, in 2017, after meeting entrepreneurs who he said had the same energy and passion that he had when launching Alibaba nearly 20 years before. While few people were willing or able to help Ma and his team in 1999, he said that he was now in a position to help Africa’s entrepreneurs and committed to doing so.

The Netpreneur Prize – which is put on by Ma’s philanthropic organization, the Jack Ma Foundation, and four African partners – will award $1 million a year for the next 10 years to support the small businesses, grassroots communities and women-founded enterprises that are growing the continent’s nascent digital economy. The annual pitch competition is open to entrepreneurs who are nationals from any of the 54 African countries, and all industry sectors are eligible.

“The finalists who competed in ‘Africa’s Business Heroes’ should be an inspiration for Africa and for the world. Each of these entrepreneurs looked at big challenges facing their communities, and saw them as opportunities,” Ma said. “It is my strong belief that entrepreneur heroes, like these finalists, will change the world – creating companies that drive inclusive growth and opportunity for the continent. Everyone is a winner tonight.”

The final 10 contestants took the stage to make their case and faced tough questions from the judges, which included Alibaba Group Executive Vice President Joe Tsai, Econet Group founder and Executive ChairmanStrive Masiyiwa and First Bank of Nigeria Chairman and The Chair Centre Group founderIbukun Awosika. The judges chose three for last round of discussions before making their choice. Along with Giwa-Tubosun, Omar Sakr, founder and CEO of research lab Nawah-Scientific, and Water Access Rwanda founder Christelle Kwizera rounded out the top three. Sakr has given second place and $150,000, while Kwizera took $100,000 for third place.

“What really struck me about the finalists was that they each addressed specific African problems with a specific African solution in a fresh way, leveraging technology that wasn’t available previously,” said Awosika. “If this is an indication of the future of entrepreneurship on the continent, then Africa’s future looks bright.”

The remaining seven finalists received $65,000 each. Ma called them all heroes, praising the work they do and the inspiration they could offer to the next generation of African entrepreneurs.

The show, “Africa’s Business Heroes,” will air on ROK 3 on DSTV on Dec. 13 and NOVELA and Sports Focus on StarTimes on Dec. 14. Applications for next year’s contest will open in the first half of 2020, the Jack Ma Foundation said.