Super Monday? How NFL Football is Gaining Yards in China 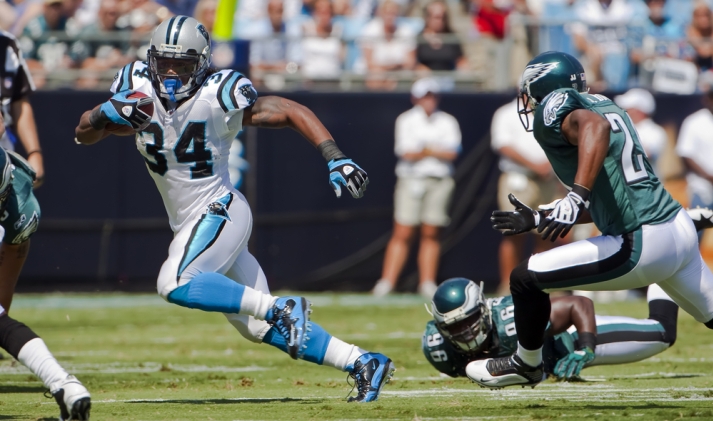 Like millions of U.S. football fans, He Xin and his buddies will huddle around a TV to watch the Denver Broncos and Carolina Panthers clash in Super Bowl 50. They’ll gorge themselves on chips and pizza. They’ll go easy on the beer, however, since the game kicks off at 7:30 in the morning. On a Monday.

He lives in Hangzhou, China, 16 hours ahead of Santa Clara, California, where the big game is set to be played on Sunday evening, Feb. 7. The 26-year-old is one of a growing number of NFL fans in a country where American football is slowly transforming from an imported curiosity into legitimate entertainment, especially among young urban males. “The sport keeps attracting teens and college students, He says. “I believe American football has a huge market potential in China.”

According to the NFL, the league’s fan base in China has surged by 1,006 percent to 17 million in the past five years. Each week, more than 1.5 million viewers tune into games on TV while an average of 300,000 stream each game online. The Super Bowl, of course, represents the pinnacle of the sport’s exposure in China. Last year’s showdown between the New England Patriots and the Seattle Seahawks drew 12 million viewers.

Those numbers are modest compared to the estimated 100 million who watch NBA basketball games regularly in China. But Alibaba Group’s newly formed Alibaba Sports Group (Alisports) sees potential in them. In January, Alisports entered into a partnership with the NFL to broadcast and stream league games (and highlights and weekly shows) throughout the mainland. Included in that deal is Super Bowl 50.

“Having Alisports, especially with the background and capabilities of Alibaba, is a significant step for us,” says Richard Young, managing director of NFL China, which set up shop in the country in 2007. “It’s a testament to the growth that we’ve had.”

Growing the sport’s worldwide visibility is a primary goal of the NFL. Young will tell you that his beat presents unique challenges. For one thing, there are those bleary-eyed kickoff times. Sunday afternoon games in the U.S. start in the dead of night in China.

For another, the Chinese see American football as brutal and violent. They much prefer Olympic sports such as basketball, table tennis and diving—sports they excel at and that evoke a sense of patriotism during international competitions. Football, without a national Olympic federation to develop participation and stoke a following, has to “build from the ground up,” says Young.

That ground-up approach includes an “NFL on Tour” truck that travels to major cities to introduce the sport. There’s also the “NFL Home Field” program, a series of skills clinics for families. In 2008, the NFL helped launch the China University Football League, a confederation of 36 college teams that play flag football, a scaled-down, non-contact version of the sport.

He Xin is a product of that league. He joined his college team in Beijing in 2008 and rose to team captain. After graduating, he was recruited by the Hangzhou Ospreys, an amateur team in his hometown that competed in the 2014 inaugural season of the American Football League of China, a national, full-contact league now with 10 teams. (The Ospreys currently play in another, more informal league.)

Like the CEO of any start-up, He fills a variety of roles. The team’s quarterback, he alsohelps coach, develop new plays, teach the rookies and recruit new players—no experience necessary. On a roster of 60, he says, almost all are Chinese. He also runs a local program he co-founded to develop players between the ages of 6 and 14.

He’s biggest challenges are locating playing fields and helping teammates find affordable equipment. Sometimes, he’ll ask a friend visiting the U.S. to buy gear and lug it back to China.

“My football career is not about making money,” says He. “I want more people to fall in love with the sport.”

From Young’s point of view, falling in love with the NFL doesn’t require actually strapping on the pads and playing the game. It’s more about learning the basics of American football and appreciating the NFL as the highest expression of the sport. Taken together, those two tenets equal a unique entertainment product with a built-in cool factor—especially among China’s growing middle class with money to spend.

“People are starting to use the NFL to define themselves, sort of like the kind of clothes you wear or the wine you buy, or the car you drive,” says Young. “When someone asks, ‘what sport do you like?’ and you answer the NFL, it says that you come from a cosmopolitan place, you have an interest in foreign things, and you like quality. It differentiates you.”

In September, the league created #SuperBowl50. It reached 190 million reads a full four weeks before the big game.

Finally, Young identifies the value of e-commerce as another fan driver. Indeed, in 2013, the league opened its NFL China Shop on Alibaba’s Tmall.com to sell official league gear and accessories. According to search and sales results, the most popular team is the New England Patriots, which doesn’t surprise Young given the Pats’ frequent playoff appearances and Super Bowl victory last year.

He Xin, whose favorite team is the Baltimore Ravens, is looking forward to rising early for the Super Bowl, which coincidentally is on the morning of the first day of Chinese New Year. Together with his buddies, he plans to add a dash of local Chinese culture to the chips and pizza party. “We’ll play mahjong while watching the game,” he says.