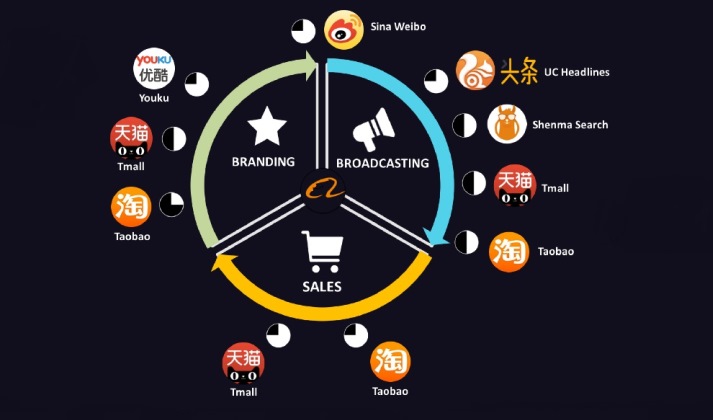 Retailers targeting the China market can build their brands, broadcast their messaging and sell to consumers all through Alibaba Group, according to a research report from Morgan Stanley, creating a one-stop solution that no other internet company—not Google, not Facebook, not Amazon–currently offers to merchants.

“Unlike its global peers, Alibaba has businesses that connect the entire value chain of digital marketing and digital commerce,” Hong Kong-based equity analyst Robert Lin wrote in the report.

Lin argued that as a result of that value chain, Alibaba’s ability to monetize its businesses “should not be narrowly defined as revenue from [gross merchandise volume], which emphasizes only transactions.” Instead, Alibaba is “a beneficiary of a much larger addressable revenue pie” as it “helps its merchants to enhance distribution, marketing and productivity efficiency,” he wrote.

The Morgan Stanley report echoed statements made by Yu Yongfu, president of Alibaba’s Mobile Business Group, during the company’s Investors Day conference last month. In the U.S., a merchant targeting the U.S. would need to hire Google, Facebook and Amazon to get the same branding, broadcasting and selling services, he said.

Google’s YouTube and Facebook offer branding and brand communications, Google’s AdWords is used for online marketing, and Amazon is the most popular e-commerce sales and distribution platform in the U.S. While often described (simplistically) as a China version of Amazon, in fact Alibaba is unique because its e-commerce sites are part of a larger e-commerce media ecosystem that allows merchants to increase their brand power in China and better engage with consumers.

Whether it’s through content such as live-streamed talk shows or online communities of like-minded shoppers on Taobao, merchants are forming stronger bonds with their customers and, ultimately, increasing sales.

Alibaba’s heavily trafficked internet properties and partners include online shopping sites such as Taobao Marketplace and Tmall, entertainment sites such as video hub Youku Tudou and information portals such as UC News Feed and search engines such as mobile search provider Shenma. The company has also invested in social media through its stake in microblogging site Weibo.

All are “interconnected, highly complementary and synergistic,” Yu said. Taken together, Yu estimated that Alibaba’s sites reach “the vast majority of Chinese internet users,” with e-commerce covering 65 percent of them, video covering 82 percent, social media 35 percent and newsfeed and search more than 30 percent.

“As long as you are awake, our media matrix is able to reach you and serve you,” Yu said. (Watch this “All Alibaba, All the Time” video for a fun look at the extent of that reach.)

Alibaba’s goal is to reach 100 percent of China’s internet users, according to Yu. To do that, the company is expanding its product and service offerings through acquisitions, investments and partnerships as well as developing the products and services itself. Alibaba wants users to spend more time on its sites, so it’s building online communities and leveraging content to do so.

The link between all of these initiatives is data. As consumers use Alibaba through the day, the company is collecting information on their shopping habits, payment and credit histories, search preferences, social networks, logistics needs and internet interests, which “allow us to understand the real-time needs of our consumer,” Yu said.

As China’s largest e-commerce company, Alibaba has access to information that shows what consumers are buying, a key indicator of “ultimate demand,” Yu said. This is data that media companies alone don’t have, and therefore it’s “absolutely valuable to marketers and our clients,” he said. “Otherwise, marketers can only play guessing games about consumer demands.”

Alibaba currently has data on 500 million people thanks to its “unified ID” feature, which tracks users across not only its internet properties but different devices as well. In addition, the company uses more than 8,000 different consumer labels related to gender, geographic location and various shopping preferences to allow for better categorization and targeting of those consumers.

Yu said a popular snacks brand was able to expand its target audience by 90 percent, increase its clickthrough rate by 120 percent and grow its overall return on investment by 135 percent by using Alibaba’s data-based marketing services. And of the total group of consumers that Alibaba’s data mining found for the campaign, 95 percent turn out to be likely customers, he added.

Yu said that over the past two years both the company’s active marketer base and the spend per marketer have been increasing. Over a million marketers are spending on the platform every month, he said.