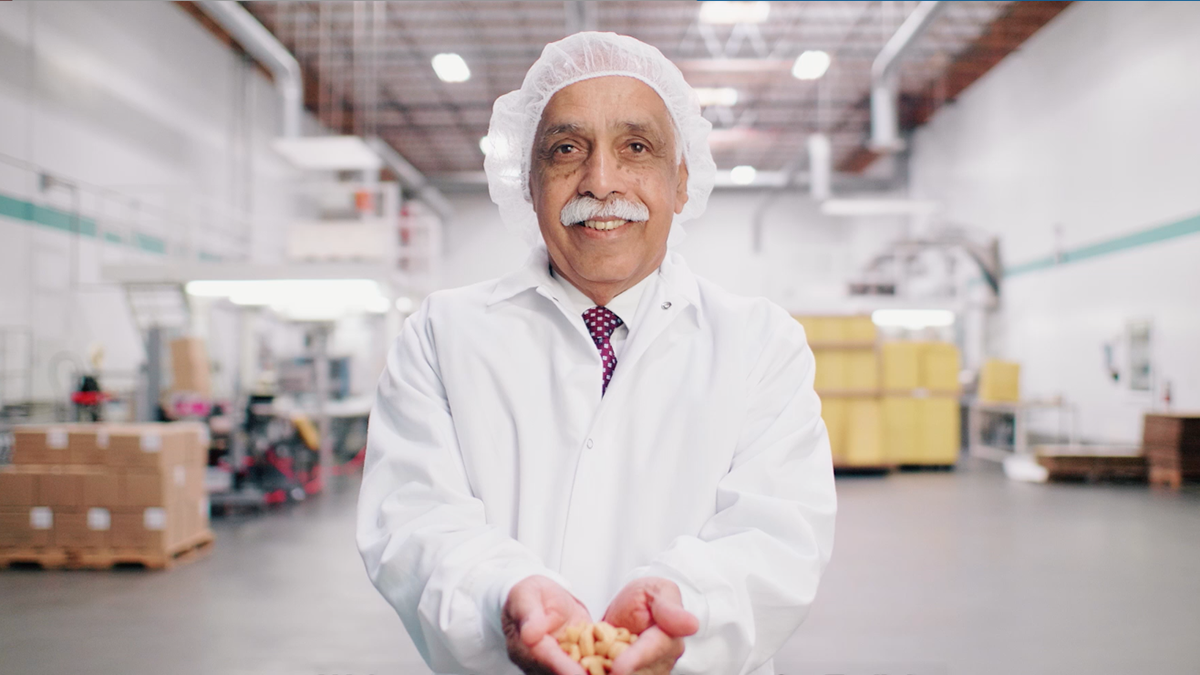 In George Paulose’s opinion, no nut is ever too tough to crack.

The 78-year-old Indian immigrant had made mega deals and conducted high-stakes boardroom battles during his days as an executive in the U.S. paper industry. But on Nov. 11, two years ago, the calm and collected father of two daughters and founder of family-owned company Emily’s Chocolates and Nuts was nervous as he awaited sales results from Alibaba’s 11.11 Global Shopping Festival.

Turns out he needn’t have worried. All 10,000 jars of Emily’s mixed nuts shipped to China through Tmall Direct Import (TDI) had been sold.

Emily’s Chocolates has its roots back in India, where Paulose came from a humble background in southern Kerala State–one of the world’s leading cashew exporting regions. Even then, he had dreams of making it big in the U.S.

He studied engineering in Norway and went on to a successful corporate career in the U.S.But at the pinnacle of that career, at 47, he packed it in. With the words of his father ringing in his ears and thoughts constantly with his family back in India, he decided to take a risk and start his own company.

“It was my grandfather’s wish that all of his six children would be in America together. To fulfill his father’s wish, my dad decided to leave his job and start his own business in which his family can be involved, and that’s how Emily’s Chocolates started,” said Amy Paulose, George’s oldest daughter, who’s the president and CEO of Emily’s Chocolates.

She said her father named the brand after her younger sister, Emily, because he wanted it to have the same “cute, happy and warm energy” as the real Emily.

In the span of 30 years, what started as a tiny, homespun operation, with his wife, siblings and other relatives working out of a garage in Fife, Washington, has become a popular brand in the U.S. that is sold in several grocery chains and 10 countries.

From Garage to Global

With his “go big or go home” attitude, George Paulose made it his goal to turn Emily’s Chocolates into a dominant player. To make that happen, he knew Emily’s would need to be in China–one of the world’s biggest and most-important retail markets.

The quickest and most-effective way in was to sell through Alibaba, the country’s largest e-commerce operator, George said. With 617 million monthly active users on its shopping sites, Alibaba is a gateway for many foreign brands into China. Through an introduction by the U.S. Trade Commission, the Paulose family met Alibaba’s TDI team in 2016.

Launched earlier that year, TDI is the direct sales channel under Tmall Global. Brands use it to test the market and gain a better understanding of Chinese consumers’ needs and preferences, to better shape their strategy in China. Because vendors sell directly to TDI, they don’t need a large, immediate investment, monitoring their products’ reception and brand-recognition before making a bigger move.

The TDI team knew they had a winner with Emily’s Chocolates at that first meeting, said Rachel Wang, a TDI senior business development manager for the U.S. market. Soon after, the first of Emily’s products were on their way to the company’s newest market.

“Emily’s has certainly proven a small business can grow to an international player. That gives me a lot of pride as mayor,” said Kim Roscoe, mayor of Fife, Washington.

WATCH: Mayor Kim Roscoe Explains Why Fife is Ideal for SMEs Like Emily’s to Sell Overseas

Emily’s Chocolates debuted in China on Oct. 15, 2016, seven days before the 11.11 warm-up period. Though only seven jars were sold in those first few weeks, it received 100% positive reviews from customers touting the quality of the nuts. The TDI team knew the U.S. brand could do much better.

“We communicated with Emily’s Chocolates on how to optimize the product. We tweaked the product’s presentation on the TDI website and added more customer review posts. Sales quickly soared to over 10,000 jars during that year’s 11.11 celebration,” said Wang.

And the numbers surged. Amy Paulose said sales of unsalted mixed nuts are now higher than salted by a ratio of two to one.Much of the credit, she said, goes to the TDI team.

“China can be a daunting market. The TDI platform is a great opportunity for you to have the guidance of someone who knows the market and to choose the products that you think that will best meet the needs of your customers,” she added.

Emily’s Chocolates leveraged the insights and expertise to launch another new product for the China market in June. The new grab-and-go single pack of mixed nuts and dried fruit was designed for busy urban dwellers in big cities. By making it portable and easy to carry, Chinese consumers can enjoy a high-quality snack even when in a rush, said Amy Paulose.

Now, Emily’s Chocolates is planning another big step into the China market by opening its own flagship store on Tmall Global.

“Our vision for the flagship store will allow…us to deepen our conversation with our customers. We will have the opportunity to get an even better sense of what they’re looking for, what types of products they are interested in and then tailor the creation of products,” said Amy Paulose.

Through the flagship store, Amy Paulose and her team hope to add new product offerings as well, including chocolate-covered berries and chocolate-covered fortune cookies. The company also wants to expand its workforce in Fife, adding two bilingual (Mandarin and English) speakers to its administrative team and another five to 10 on the manufacturing side.

When asked what he believes were the secret ingredients for turning cashews into cash over the past 30 years. Without hesitation, George Paulose said, “quality, courage and persistence.”

“Providing a quality product consistently will enable your business to be successful,” he said. “Be bold going after your dream and stick to it. Don’t be afraid!”