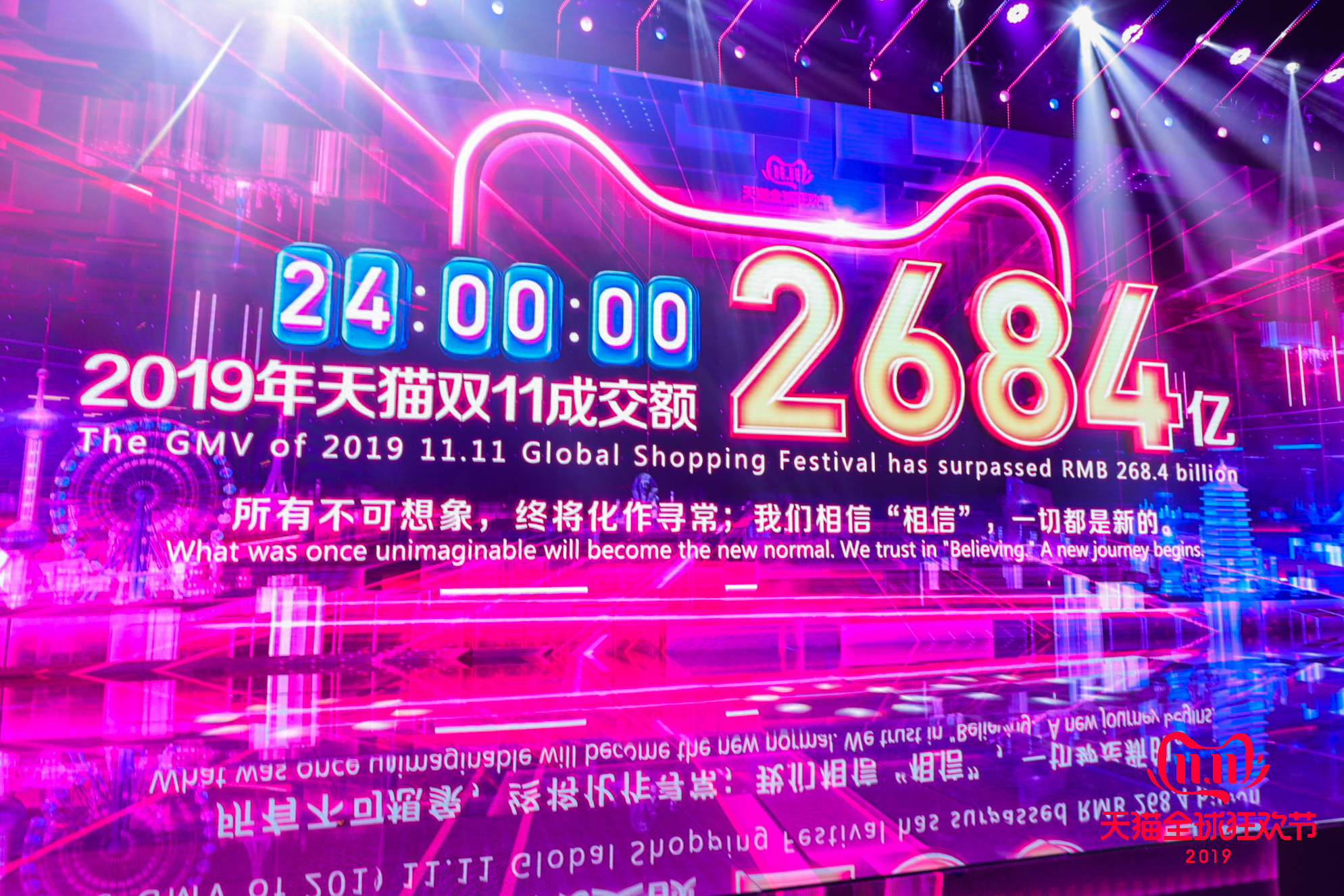 By Christine Chou and Cecilia Li
|

Eleven years in, and Alibaba Group, the e-commerce and media giant that created and grew 11.11 into the world’s largest shopping festival, is still delivering record results – and the innovations necessary to make them happen every November.

“Today we showed the world what the future of consumption looks like for brands and consumers,” said Fan Jiang, president of Taobao and Tmall. “We are meeting the growing demand of Chinese consumers and helping them upgrade their lifestyles, while introducing new users to our digital economy from across China and around the world.”

In addition to a new record GMV, the total number of delivery orders also reached a new high: 1.292 billion, up 24% from 1.042 billion last year. There were 299 brands to reach RMB 100 million in GMV, including Apple, Nike, Estee Lauder and Giorgio Armani. The top 10 countries selling to China through Alibaba’s cross-border platforms were Japan, the U.S., Korea, Australia, Germany, France, the U.K., New Zealand, Italy and Canada.

Last year’s festival was all about the Alibaba ecosystem, and certainly that ecosystem continues to play a critical role in setting new GMV records and generating greater levels of consumer engagement, as Alibaba draws additional businesses into 11.11. 2019, however, was all about consumers: where they are in China, how to reach them and providing them with the best possible selection of products.

Increasingly, those consumers are in China’s lower-tier cities and rural areas. Alibaba had said that it expected most of the 100 million new users participating in this year’s 11.11 to come from these areas, where China’s biggest consumption growth is happening. In fiscal 2019, more than 70% of Alibaba’s 102 million newly acquired annual active consumerswere based there.

“Lower-tier areas are the most important business strategy for us this year and a strategic direction for the company, because China’s less-developed markets have a lot of potential for growth when you consider their population, geography and shopping habits,” said Liu Bo, general manager of Taobao and Tmall Marketing, at a press conference on Monday afternoon.

Alibaba is leveraging its powerful consumer analytics and supply-chain capabilities to create new products for lower-tier consumers, Liu said, firstly by partnering with multinational brands, such as P&G and L’Oréal, and secondly by working with China’s vast network of manufacturers. The company provides both brands and manufacturers with the data they need to develop and market products tailored directly to these new online shoppers.

By delivering better-quality goods at affordable prices, consumers in lower-tier areas “have a lot of potential to make frequent purchases,” Liu said. And Alibaba wants to capture that consumption.

“We take new products as a major strategy for this year’s 11.11 has become the largest platform to launch new products,” Liu said. “Many international brands are leveraging the platform and the results have been excellent.”

For example, cosmetics brand MAC sold 60,000 units of a limited-edition, just-for-11.11 lipstick in five minutes of pre-sales. And brands are committed to developing even more new products for Alibaba’s platforms going forward. Ten global brands, including Olay and Shiseido, have committed to incubate more than 50% of their new products with Tmall this year, Jiang said.

The Must-Do of Livestreaming

Once just a single marketing tool among many for brands selling to China, livestreaming has since become a must for any company that wants the attention of Chinese consumers.

WATCH: How Does KKW Keep Up with Chinese Consumers? Livestreaming

These consumers use livestreams, typically hosted by popular key opinion leaders, to find and learn about new products, making it an essential part of product discovery. That’s a stark contract to the West, where most livestreaming platforms are focused on gaming and entertainment.

Just how popular is the trend? Taobao is home to over 4,000 livestream hosts who generate 150,000 hours of content each day. For 11.11, more than 100,000 brands and merchants used livestreaming to market their products.

“It’s a brand-new experience. Livestreaming is becoming ubiquitous for merchants and a new [shopping] channel for consumers,” he said.

Jiang said that Alibaba’s logistics arm, Cainiao, had delivered 100 million packages before 8 a.m. on Monday, just eight hours into 11.11. But he said the company was committed to fulfilling those orders sustainably.

“Green is the most important keyword for this 11.11,” Jiang said. “We’ve shipped 1.292 billion packages, but through this we want even more to promote the concept of green consumption.”

To that end, Cainiao has set up more recycling stations – 40,000 of them – across China through itsCainiao Smart Logistics Network, while its express-courier partners is hosting an additional 35,000. Consumers will also be rewarded “green energy” points onAnt Forestfor their recycling efforts.

Alibaba has established Nov. 20 as “National Cardboard Box Recycling Day” in China, as well, to further promote its push for a green shopping festival.