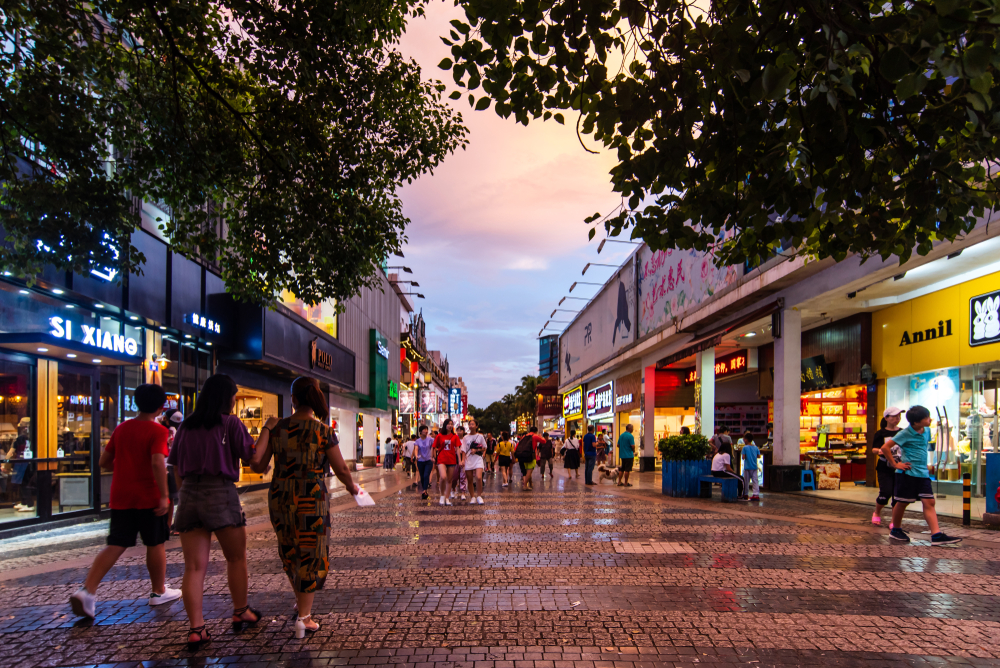 Consumers in so-called lower-tier cities, China’s less-developed urban centers, and rural areas are driving the next wave of consumption growth in the country. As rising incomes lead to an upgrade in lifestyle, these consumers are increasingly looking for higher-quality goods, yet still at reasonable prices. They often search group-buying sites or cross-border e-commerce channels for these deals, giving international brands a chance to capitalize on a major consumption-upgrade trend playing out in the world’s second-largest economy.

While there are various definitions of city tiers based on levels of economic development, lower-tier markets generally include tier-three cities, such as Guilin (pictured above), to tier six, which are county-level urban centers and townships. Rural areas are also included. There are four tier-one cities and 46 second-tier cities in China, but there are 193 third-tier cities and 696 fourth-tier cities, according to data from McKinsey Global Institute. And these markets, including China’s rural areas, were home to 934 million people in 2017, research firm Analysys reported. That’s about three times the total population of the U.S.

Total consumption in these lower-tier cities and rural areas, which reached $3.3 trillion in 2017, is expected to reach $8.4 trillion in 2030, according to a Morgan Stanley study. Of that estimated $8.4 trillion, $6.9 trillion will come from China’s still-growing urban centers, while the rest comes from rural areas. This is being driven by China’s massive urbanization, as people leave the countryside for steady work and better services in the city and migrant workers return to their home cities for a slower pace of life. About 60% of the 833 million people living in China’s urban areas were located in third-tier and lower cities in 2018, according to McKinsey Global Institute’s calculation.

In its latest earnings report, e-commerce giant Alibaba Group said that more than 70% of its 102 million newly acquired annual active consumers in fiscal 2019 came from these less-developed cities.

Who Are These Consumers?

For one, they are less worried about spending than their peers in higher-tier markets, not least because lower housing costs bolster their savings. A Nielsen report revealed that consumer confidence in lower-tier cities and rural areas was higher than first-tier cities in 2018. In particular, rural consumers showed the strongest confidence in spending in 2018, which tracked their faster-growing disposable income compared to urban dwellers. According to China’s National Bureau of Statistics, the average disposable income of rural consumers grew 8.8% in 2018 versus 7.8% for city residents.

Also, they are more willing to search for a great deal than their top-city counterparts. A study by Analysys showed that shoppers in lower-tier cities and rural areas say price is one of their top three factors when making a buying decision, while trendiness and novelty were the least important considerations.

However, the perception that lower-tier market consumers want only bargains is quickly becoming obsolete. They are increasingly putting emphasis on both quality and value as their standards of living improve. In fact, quality became the number one factor for lower-tier market consumers when choosing a product, similar to top-tier city consumers, according a study by market research firm Analysys.

Perhaps it is not surprising, then, that they are turning to cross-border e-commerce for better-made, imported products that they can’t buy at their local brick-and-mortar stores. About 64% of lower-tier market consumers have made a cross-border purchase, according to a consumer study by Analysys. Imported products from cross-border channels were among the top five fastest-growing categories for lower-tier market consumers, the study showed.

Group-buying and flash-sale platforms, such as Alibaba’s Juhuasuan, are popular destinations among lower-tier market consumers who want quality products at competitive prices. Nearly half of the first 100 million products sold through Juhuasuan promotions for the mid-year 6.18 Shopping Festival came from consumers in tier-three through tier-six cities, according to Alibaba. Beauty product purchases by lower-tier city shoppers through Juhuasuan, in particular, saw a 143% year-over-year surge during the first two days of the festival, which runs June 1-18.

For brands, there is also an opportunity to introduce their products to a new consumer base. In 2018, new customers accounted for 80% of the gross merchandise volume of products that brands promoted through Juhuasuan, and nearly half of those new customers were from lower-tier cities. In April, Juhuasuan hosted an “Under the Cloud” concert in partnership with seven international sunscreen brands, including Naris and Mentholatum, in China’s southwestern province of Yunnan, which is known for its high-altitude climate and year-round sunny weather. During the three days of the promotion, the participating brands saw an average increase in sales of nearly 300% from Yunnan-based customers and an average 278% increase in the number of buyers from the region compared with the same period in 2018.

Meanwhile, Apple’s GMV from lower-tier cities grew 170% year-over-year during the first two-days of 6.18 promotion, significantly outpacing the growth rate of first- and second-tier cities. Most of Apple’s 42 offline stores in mainland China are located in top-tier cities, so Apple’s Tmall store is a convenient way to reach the “small town” customers who are just as enthusiastic about the brand.

In order to help these lower-tier markets find good-quality, affordable products, Alibaba launched a “Daily Deals” program that allows factories to sell directly to the end consumer. This allows the factories to cut costs that may otherwise be added as a product moves through the supply chain from maker to buyer. The program also offers the factories consumer analytics so that they can adjust their manufacturing to suit demand. For example, it brought consumer analytics and technical support to a Zhejiang-based sock manufacturer to help update its design to better suit consumer preferences. As a result, the factory cut production costs by 7% per pair and sold 1.53 million pairs in three days through Juhuasuan.

The lower-tier market opportunity is not one-size-fits-all. There are still nuanced consumer preferences in different tiers of cities, as well as rural areas. All of the residents in these less-developed areas are experiencing a consumption upgrade, but from different starting points. That will require brands to create tiered strategies to target consumers that might have different tastes.

The “off-price” or outlet strategies that many international brands use in the West may be an attractive way to engage lower-tier markets in China. The off-season bargains from brands, or products with more basic styles at competitive prices, are well-suited for these markets.