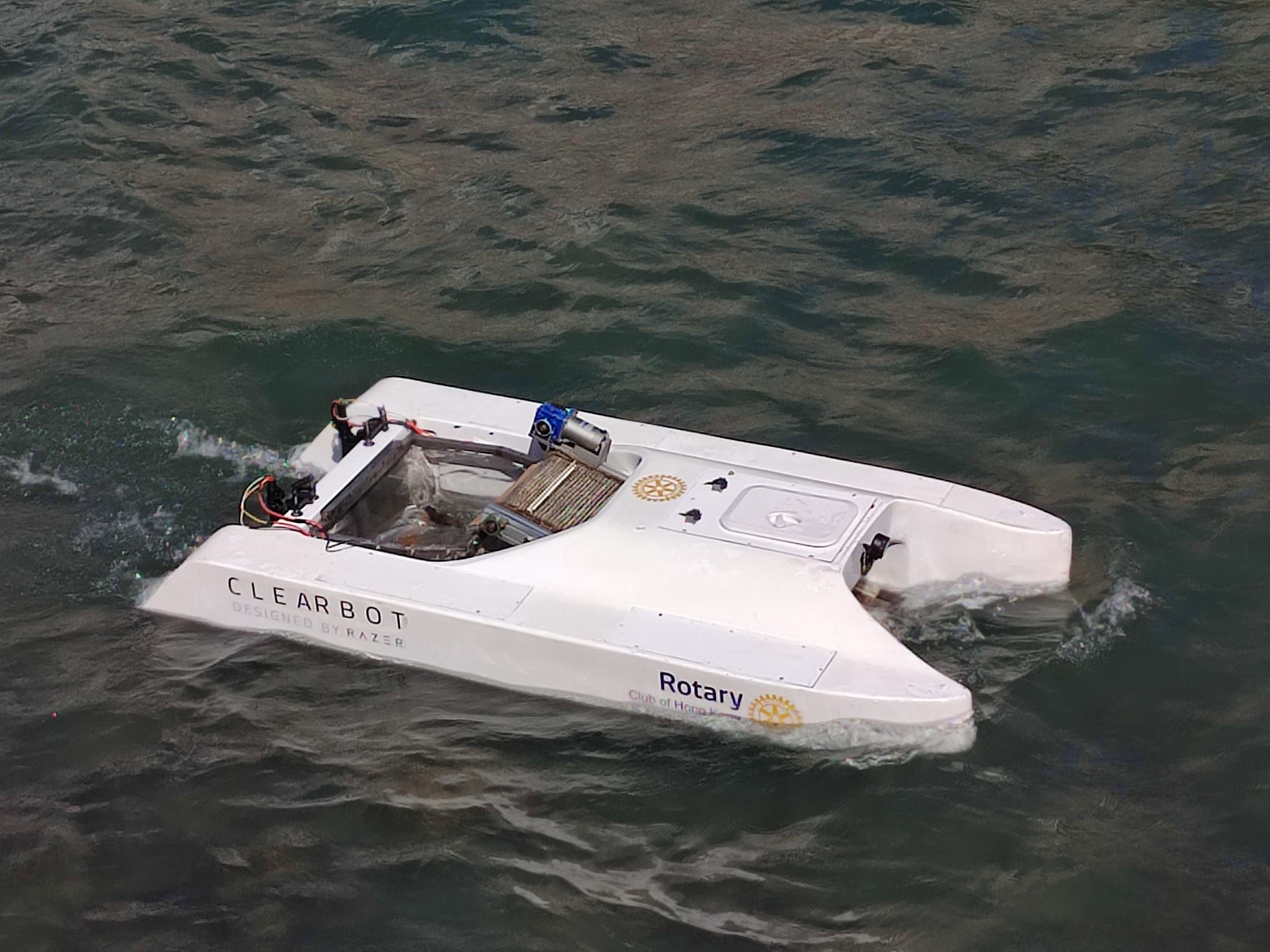 Walking along Hong Kong’s seashore, it’s hard to miss the floating grocery bags and soda bottles – traces of the millions of tonnes of garbage filling our oceans every year.

Open Ocean Engineering, a winner of Alibaba Group’s Jumpstarter 2022 Global Pitch Competition for start-ups, may have the answer.

The Hong Kong-based start-up is working to turn the tide against pollution of our oceans with its automated zero-emission boats – called Clearbots – engineered to scoop trash out of the water and bring it ashore to be sorted and recycled.

“The entire idea is to help the marine sector move towards cleaner and greener fuels,” said company co-founder and CEO Sidhant Gupta when he collected the Jumpstarter award on Tuesday.

Oceans worldwide could benefit from having a Clearbot or two.

In the roughly four minutes it takes to read this story, another 79,000 kg of trash from around the world will be deposited in the sea, based on estimates by environmental activist group World Wide Fund for Nature.

“Start-ups tend to happen when innovators have a mission to solve a problem,” Cindy Chow, an Executive Director at Alibaba Entrepreneurs Fund (AEF), told Alizila.

On Tuesday, Chow announced that Gupta and his team were one of two winners of this year’s Jumpstarter competition, a not-for-profit contest created by AEF and sponsored by HSBC to foster innovation in Hong Kong.

Open Ocean is a winner today, but it hasn’t all been smooth sailing the last three years to raise capital and bring the Clearbot to market.

“A lot of people didn’t believe that there was a viable business here. We are saving the environment, but they didn’t see the monetary opportunity at all,” recalled Gupta.

The start-up’s mainstay product was initially a class project, constructed three years ago during a trip to Bali using materials at hand. For the University of Hong Kong students, it was a knee-jerk response to the piles of garbage they saw on the beaches.

“The trick is to act on it and get out of it,” said Gupta. This mindset pushed him and his partners to try out for Jumpstarter in 2020, where they won the competition’s IdeaPOP! Award given to Hong Kong’s most innovative students.

The co-founder credits the Jumpstarter competition for helping to get the company off the ground in 2020.

“We started putting ourselves out there and eventually, resources came because there are people who are passionate about the same problems,” Gupta told an online audience for the Jumpstarter results on Tuesday.

Since then, Clearbot has been through countless hardware and software upgrades. The floating robot has a four-hour battery life and, using artificial intelligence, can identify common trash like cans and bottles with 95% accuracy, according to Gupta.

We started putting ourselves out there and eventually, resources came because there are people who are passionate about the same problems

Clearbot has the potential to disrupt the garbage collection industry as it paves the way for greater automatization and a new way of doing business, according to Gupta who has broken a Guinness world record for the fastest robotic fish.

Open Ocean counts many marine construction companies and local government as clients, who gravitated towards the start-up as a cheaper and more convenient way of gathering trash.

“People are relying more and more on robots and remote systems,” said Gupta.

Traditional trash collection boats require three staff on board to operate, with fuel costs reaching up to $10 for every kilogram of trash removed – and that’s not including employee wages.

In comparison, the self-driving Clearbot easily carries 200 kg of waste and 15 L of oil for less than $0.1/km in energy costs and gathers environmental data to generate reports, measure water quality and track pollution.

Following a rental service business model, groups can lease Clearbot vessels by the hour or more. But this is temporary.

“We’ve entered the market in a place – at least in terms of payment – that the customer is already familiar with. Then we can create a better business model in the future as the customers are more comfortable with us,” he explained.

The company is exploring a fleet rental model, increasing the scale of possible clean-up projects and giving customers access to a large number of Clearbots for a month at a time.

A path to profitability is on the horizon for Open Ocean as people and companies alike come face-to-face with the issue of marine garbage.

Waste collected by the start-up’s devices is usually either recycled or properly disposed of by the client. However, as a tech service provider Open Ocean cannot control exactly what becomes of the rubbish.

Clearbot is meeting demand that will only grow, as the world’s oceans mop up remnants of the global pandemic Gupta credits with helping to raise awareness about the need for the start-up’s services.

More than 1,370 trillion microplastics from surgical masks alone ended up in the sea in 2020, according to research from Hong Kong’s City University.

The start-up’s solution is relatively inexpensive. At present, it costs between $5,000 and $6,000 to manufacture each device, and this is only getting cheaper.

“As we are producing more boats, the cost of each boat is reducing, which makes it accessible or possible for developing countries and smaller communities,” said Gupta.

This month, Open Ocean Engineering shipped its first boat to India, and in May, another one will arrive in Panama.