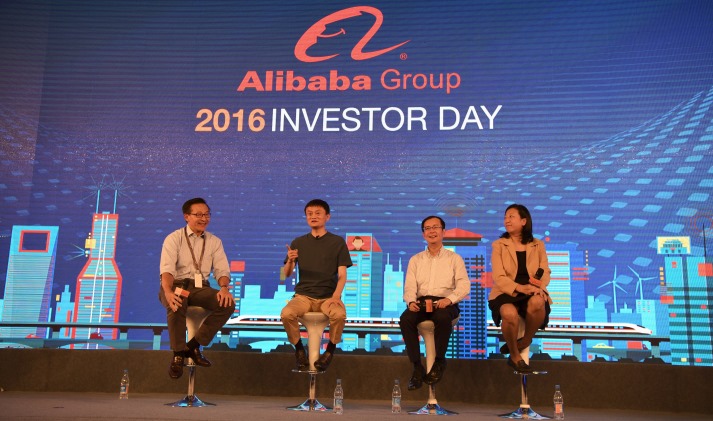 Jack Ma, executive chairman and founder of e-commerce giant Alibaba Group, said that Chinese companies listed on U.S. stock exchanges are always asked two things: Can you explain your company in one sentence? And is there a similar business currently operating in the States?

The answer to both those questions, at least when discussing Alibaba, Ma said, is “no.”

Speaking on Tuesday at the company’s first-ever Investor Day conference, held at its headquarters in Hangzhou, China, Ma was explaining to the very people who typically ask those questions how Alibaba is different than the U.S. internet companies it’s so often compared with.

The company has come to see that task as increasingly important since its 2014 IPO as it transitions from a pure e-commerce play to an internet company with a broad ecosystem of services including cloud computing and big data, online payments, logistics and marketing. Alibaba has also made big moves into the media and entertainment sectors, further expanding the ways it can engage consumers.

Alibaba’s top executives were in attendance for Tuesday’s conference, and they offered hours of insight and data points about the company—more than10 hours, in fact. There is too much information to recap here, but we’ve pulled out six key takeaways from the conference below. In the coming weeks, Alizila will revisit the conference presentations in greater detail.

Alibaba has set a goal of generating RMB 6 trillion (about $1 trillion) in gross merchandise volume by 2020, and wants, over the longer term, to ultimately serve 2 billion customers, Ma said during Investor Day. (Regarding that latter metric, it’s half way there. In March, Alibaba announced that GMV reached RMB 3 trillion for that fiscal year.) Ma also said the company wants to become the world’s fifth-largest economy in 20 years.

To close the remaining gap, the company will focus on growth in three areas: expanding its business overseas, targeting China’s rural consumers and leveraging its trove of shopping data to better serve its users and the merchants trying to reach them.

For more information on globalization, read comments from CEO Daniel Zhang here. The latest on Alibaba’s rural initiatives is here. And here’s a good take on how the company is putting its data to work for merchants and consumers.

Chief Financial Officer Maggie Wu emphasized the importance Alibaba puts on transparency, making sure investors have what they need to understand the company and its businesses.

To that end, she announced that the company will begin providing annual revenue guidance. Fiscal year 2017 total revenue growth would come in at more than 48 percent year-over-year, Wu said.

“This will help our investors better understand our core business results and development of our new businesses,” Wu said.

This emphasis on revenue is part of a broader recognition that the value Alibaba brings to merchants goes beyond simply generating online sales (more on that below). But that doesn’t mean the company will stop reporting GMV figures. Alibaba is still aiming for the RMB 6 trillion GMV mark. But rather than disclosing the number on a quarterly basis, after the current June quarter it will be disclosed only in Alibaba’s annual report.

3. More Than a Sales Channel

Alibaba has been redefining itself as more than an online sales channel. The company now offers merchants increasingly sophisticated marketing tools for brand-building, customer acquisition and engagement, retail rollout planning and productivity planning, which allows for a more sophisticated shopping experience for consumers. The company relies on the shopping data it has collected to help merchants deliver personalized webpages and product recommendations, targeted marketing campaigns and even after-market services to customers.

“Our business model as a platform brings more value to consumers and those who want to reach our consumers,” Wu said. “That is why you have seen in the past several quarters that our China retail marketplace revenues grew at a consistently faster rate than GMV.”

During Investor Day, Alibaba Group Executive Vice Chairman Joe Tsai said Alibaba has a very specific way of valuing these investments, though it may not be obvious to investors and journalists. They are intended to increase user acquisition and engagement, improve customer experience and expand the range of products and services that Alibaba offers to its users, he said.

In that light, the investment into Suning can be seen as enhancing Alibaba’s competitiveness in the electronics space and in China’s growing omnichannelmarket. Investments in local services providers Koubei and Ele.me give Alibaba a leadership position in that burgeoning sector as well. The Lazada deal—as well as an investment in Indian online payments provider Paytm—enable Alibaba to make inroads in promising markets outside China. Even cash injections into related businesses, such as Cainiao, serve to boost the reach of Alibaba’s delivery services and shorten the time it takes to get goods to consumers.

When considering whether or not spending 10 percent of Alibaba’s market cap for leadership positions in these sectors and markets, as well as buying back $5.1 billion worth of stock, was the right move for Alibaba, Tsai called it “an absolute no-brainer.”

5. The Power of the Mobile Taobao App

When describing the company’s logistics strategy, Tsai said it was more efficient for Alibaba to connect the existing logistics providers in China by forming a consortium—Cainiao Network—than to build and operate its own in-house delivery network.

Today Cainiao, which has 1,200 employees, handles some 33 million packages a day, he said.

Compare that to rival JD.com, which runs an in-house delivery network that handles 3.4 million packages. JD.com has 100,000 employees.

To reach Alibaba’s delivery-to-employee ratio, JD would need 1 million employees, according to Cainiao CEOJudy Tong. Amazon, on the other hand, delivers about 5 million packages a day, she said. And how many workers are needed to facilitate that? About 230,000.