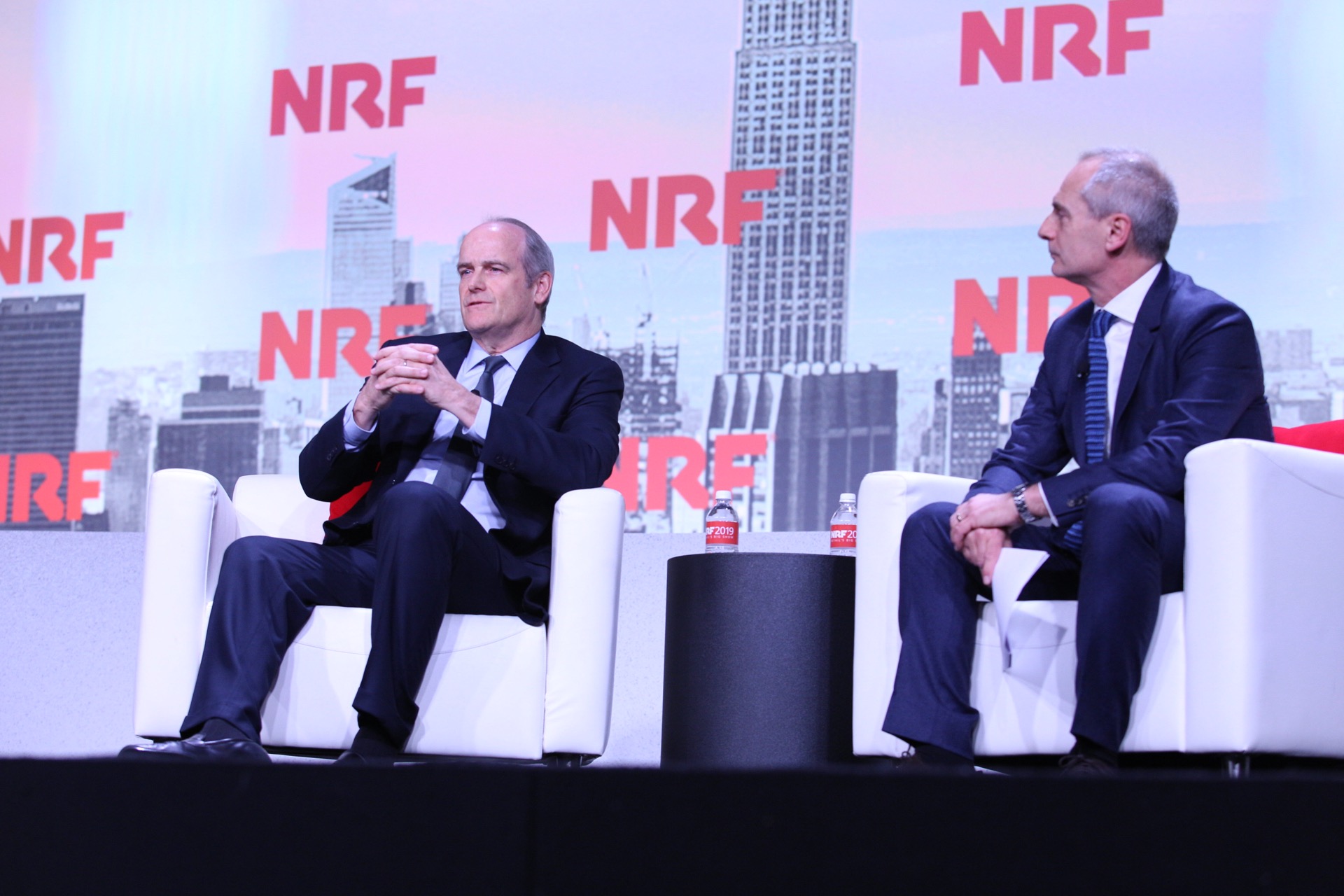 Also, the NRF each year names its “List of People Shaping Retail’s Future,” and Alibaba Group President Michael Evans was among the honorees for 2019. In addition to receiving his award as a “Power Player” shaping the future of retail, Evans also sat for a fireside chat on Monday morning with World Retail Congress Chairman Ian McGarrigle. The topic: “Commanding Today’s International Retail Markets.”

Alizila got the chance to sit down with Evans ahead of his chat with McGarrigle. We asked him about his long history with Alibaba, what eventually drew him to join the company and his thoughts on the future of retail, among many other topics. An edited version of that interview is below.

What was your first job in retail?

My first job in retail was at Alibaba, starting almost four years ago.

So, tell us about your career path and what led you to Alibaba.

I worked in banking for 32 years across all parts of the business all over the world. I was first exposed to Alibaba in 1998 when I lived in Asia, building Goldman Sachs’ Asia business, including China.

What’s the most-important thing this job has taught you?

Retail is changing more quickly than most people realize through technology, innovation and the digitization of the entire end-to-end process for merchants and consumers. That is reshaping the way we think about every aspect of our business.

What made you decide to join the company?

After I left Goldman in 2013, I got a phone call from Jack Ma and Joe Tsai asking if I would like to become an Alibaba board director prior to the IPO in August 2014, which I did. After the IPO, Jack and Joe asked me to join the team as president of Alibaba Group.

Why did they ask you to come aboard?

A big part of Jack’s vision is to globalize Alibaba, and he knew that would be difficult if he couldn’t attract leaders who had lived and worked in markets all over the world. He also needed leaders with a strong understanding of China and Alibaba. I built Goldman Sachs’ China business starting in 1994 and worked in China for more than 20 years. So, the combination of understanding China, knowing Alibaba and building and leading businesses in markets around the world meant I could help Jack and Alibaba with their globalization ambitions.

Do you think you’ve developed a passion for the retail industry, having worked for Alibaba for several years?

Yes, but it’s not the passion that most people in retail would think of. My focus is understanding the consumer and merchant value proposition for New Retail.

Why are you so passionate about the concept of New Retail?

I’m passionate about New Retail because I believe it’s the future of retail both in China and globally. By digitizing the entire retail value chain, we can significantly improve the experience for both merchants and consumers.

Serving our merchants and consumers is fundamental to Jack’s vision for the business from day one. We want to make it easier to do business anywhere, anytime, be it online or offline, in the digital economy. We are proving out this New Retail concept in China, but believe New Retail is the future of retail globally.

What do you think is the most important trait of a leader?

Several things: 1. a clear vision; 2. the passion and ability to execute the mission; 3. building and motivating a great team; 4. adapting to change continuously.

What do you personally do to become a better leader? Who do you learn from?

I keep learning from others! I’ve learned a lot about leadership from Jack Ma and our CEO, Daniel Zhang. From Jack, it’s passion, creativity and the clarity of vision. And from Daniel, it’s operating expertise and discipline, which defines the direction in which we’re heading and the steps we take to get there.

What’s the best career advice you ever received?

What gets you most excited about going to work every day?

Helping to lead the team that globalizes Alibaba. It’s a unique challenge and opportunity, and I believe one of the five best jobs in the world.

What about helping new brands grow in China and digitize? Anything you want to say about that?

A big part of our globalization strategy is connecting brands and small businesses from all over the world directly to the Chinese consumer. China is a massive consumer market and an attractive growth opportunity for many businesses today and in the future.

Many brands globally have not properly understood the China opportunity. Some see it more as a short-term phenomenon, as opposed to a long-term strategic opportunity. While China is not the panacea for all brands, for tens of thousands of brands all over the world, and for small businesses, it’s a huge consumer market today and in the future. It’s exciting to not only explain the opportunity, but also to show brands how to take advantage of that opportunity whether you’re in food, consumer products, electronics, fashion or luxury. China is a big opportunity, and e-commerce is making it easier than ever for brands to tap into that opportunity.

If you haven’t been to China in a while, I invite you to come because it’s a way to glimpse what the future of retail will look like globally. What you will see is the full digitization of the entire retail value chain – from product innovation, consumer engagement, inventory management, logistics, payments and even product development. Consumers don’t think about the world online versus offline – neither should brands and retailers. When we digitize this, retail becomes more consumer-friendly, more efficient and adaptable, and more profitable for merchants.

From the consumer perspective, retail is more of a lifestyle than a chore in China. It’s the difference between “buying” something and “shopping” for something. Artificial intelligence-driven personalization means consumers are opening our app nearly eight times a day to see what is being served up for them. Livestreaming, short-form video and gamification erase the lines between shopping and entertainment. And your mobile phone is the remote control to your life – you’re increasingly able to get whatever experience you desire in 30 min or less. This is what the future of retail looks like, and it’s already happening in China on Alibaba’s platforms.

For merchants, New Retail is also very exciting. Every brick and mortar store has the potential to be a fulfillment center. AI is the heart of everything we do at Alibaba, and we are leveraging it in support of our merchants – for customer service, inventory control, logistics and even product development. For example, when Mars was looking for a new flavor of Snickers for Chinese consumers, we looked at the consumer insights and determined that a new “spicy numbing” flavor fit the bill. It has been a great success.

What advice would you give to someone who wants to build a career in retail?

Keep an open and innovative mind. Take the time to understand the business and the strategy. Study the role of technology and innovation and think hard about how it can disrupt the industry. Embrace the rapid pace of change.

What’s the next big thing for Alibaba?

There are many big things on the horizon. Let me highlight a couple areas: First, people were very excited when we unveiled our “New Retail” grocery concept Freshippo. I recently heard it described as a mix between Whole Foods and the Jetsons. I think it’s fair to say that Freshippo is a massively disruptive business model for the grocery space. But this is only the beginning of how Alibaba can revolutionize the entire retail value chain and the merchant and consumer experience. Second, artificial intelligence has the potential to transform every aspect of retail – from personalization to customer service to logistics and even product development. At Alibaba, AI is already integrated in every aspect of our business, and we have only scratched the surface in terms of its potential for us and for our merchants and consumers going forward.

What would you say are your biggest accomplishments since you joined the company?

Building a great team, shaping the globalization strategy and executing on Jack and Daniel’s vision to globalize Alibaba.