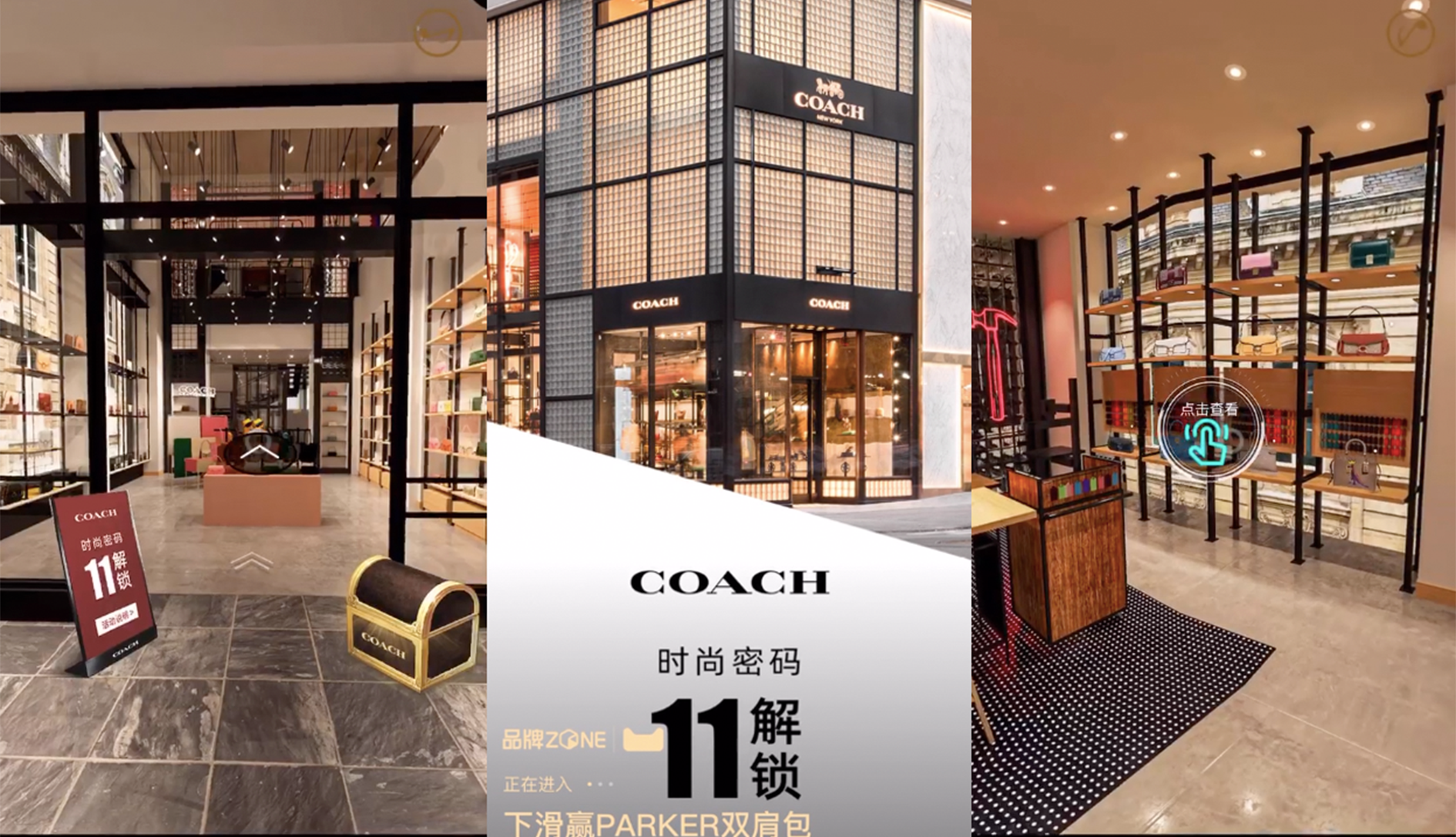 The feature allowed Chinese shoppers, who haven’t been able to travel abroad due to Covid-19, to virtually browse and purchase Coach’s products at its boutique on New York’s Fifth Avenue from the comfort of their homes. The American fashion house gamified the experience as well: Shoppers were encouraged to complete tasks that expanded their virtual wardrobes, which then unlocked new perks and privileges. Consumers would earn points when they checked into Coach’s Pavilion store daily, for example, shared the campaign with their friends or joined the brand’s membership program.

The virtual-shopping experience was rolled out via Alibaba’s “Brand Zone,” a tool that allows shoppers to access special pages of content by dragging down the screen on their smartphones – a hallmark of Alibaba’s new storefront, Flagship Store 2.0. In just two weeks into the campaign, Coach said the consumers who accessed the new feature had, on average, more than doubled the time spent in the store, with more than 15,000 users participating each day.

“Chinese consumers love fashion and are highly digitally engaged,” said Yann Bozec, president of Tapestry Asia Pacific and CEO and president of Coach China. “For Tapestry, China is not only a vital market, but also an inexhaustible source of inspiration for our brands to seek breakthroughs and innovations.”

The market has become a key driver of growth for Tapestry, the parent of the Coach, Stuart Weitzman and Kate Spade luxury brands. Its revenue in the region rose to double-digit growth in the past quarter buoyed by the recovering demand for luxury handbags and apparel from the pandemic. The company attributed the surge also to its effective marketing, product variety and expanded reach across platforms, including the launch of Coach’s flagship store on Tmall Luxury Pavilion last September. In April, Coach also was the first to opt in to Luxury Soho, the Pavilion’s new sister site, aimed at younger, value-conscious luxury shoppers.

Its continued push to harness digital technologies and platforms seems to have paid off. In just an hour into 11.11 presales, Coach had hit RMB10 million ($1.51 million) in gross merchandise volume, and within an hour into the official kickoff, beat its full-day sales record from last year. By the end of the shopping festival, Coach has reported a sevenfold increase in GMV, compared to last year’s festival, and emerged as the top-selling brand in the handbags, luggage and leather goods category.

The Alibaba shopping festival is the biggest of its kind and, especially this year, has become a key opportunity for brands to rekindle consumer enthusiasm after Covid-19, said Judy Chang, vice president of Marketing and E-Commerce for Coach in the Greater China region. For the brand, it has also represented an important moment to deepen its connection with Chinese consumers.

Coach enriched its range of products on offer with the addition of hundreds of newly released items, including some available only on Alibaba’s platforms. It also offered a differentiated assortment of products for the Luxury Pavilion and Luxury Soho platforms: On the Pavilion, the brand spotlighted its hottest new “it” bags, crossovers and celebrity favorites, while to entice price-conscious, young shoppers on Luxury Soho, Coach featured more signature classics and last-season items. Both stores raked in no less than RMB100 million in GMV during 11.11, respectively.

Also, its loyalty program members received the same rewards and points on purchases as they would in a brick-and-mortar store, as Coach integrated its system with the Alibaba platforms ahead of 11.11. This resulted in 100,000-plus new membership sign-ups for the brand over the course of the event.

Aside from offering immersive experiences like the 3D-shopping feature, Coach also doubled down on livestreaming, from collaborating with influencers, like Austin Li, to producing its own original programs on Taobao Live, Alibaba’s dedicated livestreaming platform. Per the brand, all of its streams broadcasted during 11.11 had been viewed more than 50 million times combined.

Chang, who was among the Coach’s executives who personally joined livestream sessions to directly engage consumers during 11.11, said the medium has created an important space for direct dialogue with their customers.

“Our success this 11.11 is also the result of the partnership with Alibaba to drive digital innovation across our brands in China,” she said. “We’re seeing how New Retail technologies can merge online and offline experiences and strengthen the bond between consumers and our brand. We will continue to elevate customer experiences further to meet the diverse needs of consumers and provide a truly digitized and personalized experience.”