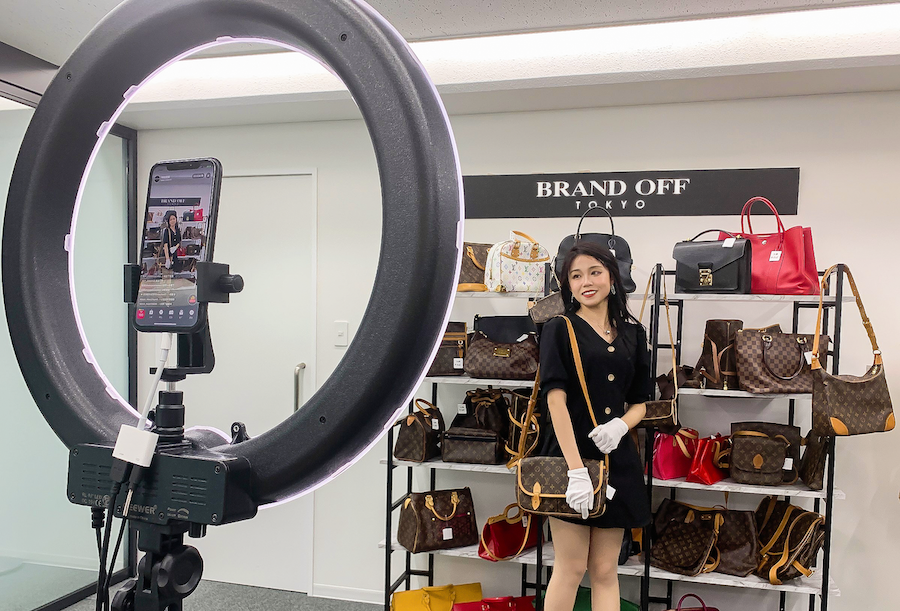 For Japanese secondhand luxury goods retailers, all of the clothes, bags and jewelry languishing in consumers’ closets across China represent an opportunity that’s becoming too great to ignore.

Brand Off joins a growing list of Japanese secondhand resellers that are partnering with Alibaba’s cross-border marketplaces, such as Daikokuya, Brandear and Reclo to expand in China.

The luxury resale market is growing as more consumers are crystalizing the value of their luxury goods and embracing a more sustainable lifestyle.

In Japan and the U.S., sales of pre-owned luxury goods make up roughly 30% of the overall luxury market – compared to just 5% in China, according to a June report by Beijing’s University of International Business and Economics.

China’s pre-owned market – though still in its infancy – has growth potential, said Yamauchi. “The country’s pool of untapped, resale-ready luxury items is the biggest in the world.”

Then Covid-19 hit. It forced Brand Off to accelerate its expansion plans in China and reconnect with fans on their own turf. Yamauchi said the firm wants to establish a foothold in the market before a single dominant player emerges.

During 6.18, the second-largest e-commerce shopping festival in China, Brand Off tapped into the emerging livestreaming trend to bring some of its most exclusive, sought-after products to Chinese shoppers.


Instead of hiring influencers, the company produced streams featuring its sales associates, who have solid product expertise and understand vintage consumers’ shopping patterns. It also plans to use livestreaming to take consumers on virtual tours of its shops across Japan going forward, as well as to expand its after-sales services and further roll out its artificial intelligence-powered image-scanning technology, designed to help check the authenticity of products.

"Covid-19 has moved digitization and online higher up on the agenda for us. It's pushed us to try so many new things in such a short amount of time," Brand Off's Yamauchi told Alizila in an interview.

The coronavirus pandemic has given luxury resale a lift, as homebound consumers declutter and embrace sustainability. The trend appears to be taking hold on Alibaba's secondhand-trading app, Idle Fish, which saw registered users on the app hit 30 million last year, while China is seeing the rise of more fashion-focused secondhand startups, like Beijing-headquartered Plum and Shanghai-based Feiyu.

Overall, sales of secondhand goods in China reached RMB1 trillion (US$154 billion) in 2020 – double that of 2017, according to a pre-pandemic study by the China Center for Internet Economy Research, a Beijing-based think tank.

Japan’s Reclo raked in sales of over RMB10 million during 6.18 and has so far gained more than 149,000 followers since launching its flagship store on Tmall Global earlier this year.

To make it easier for vintage enthusiasts to discover the products they love on the platform, Tmall Global curated a content series for its three-day "Global Discovery Day" event. It features short videos, livestreams and even mini-documentaries exploring Japan's vintage culture and what luxury means to young people in China.


"We've seen a rise in demand among young consumers for secondhand and vintage luxury products," said Dong Wen, head of fashion for Tmall Global. "Now that they can't travel overseas, we wanted to move fast to bring their favorite stores to them."

She pointed to social media, stronger awareness around sustainability and changing attitudes towards secondhand goods as the key drivers behind the category's growth. Today's younger generation is less concerned about big-name designer brands, and focused more on expressing themselves through what and how they buy, Dong added.

From 'Pre-loved' to Re-loved

More than half of China's secondhand luxury shoppers are below 30 years old, reported the University of International Business and Economics. Unlike previous generations, which looked upon pre-worn items with suspicion, Gen Z and millennials are shedding this traditional cultural stigma and seeing secondhand trading in a new light.


"It comes down to uniqueness," said Mark Tanner, founder of Shanghai-based research agency China Skinny. He said vintage shopping is a way to get the kind of products that can't be easily found elsewhere, he said, somewhat like why some shoppers enjoy traveling overseas – so they can find items that no one else around them has. "People who buy luxury products are generally quite sophisticated consumers who want things that are less mainstream, less common. So, there's a real opportunity for secondhand."

"They'd think, well, I could always sell it."