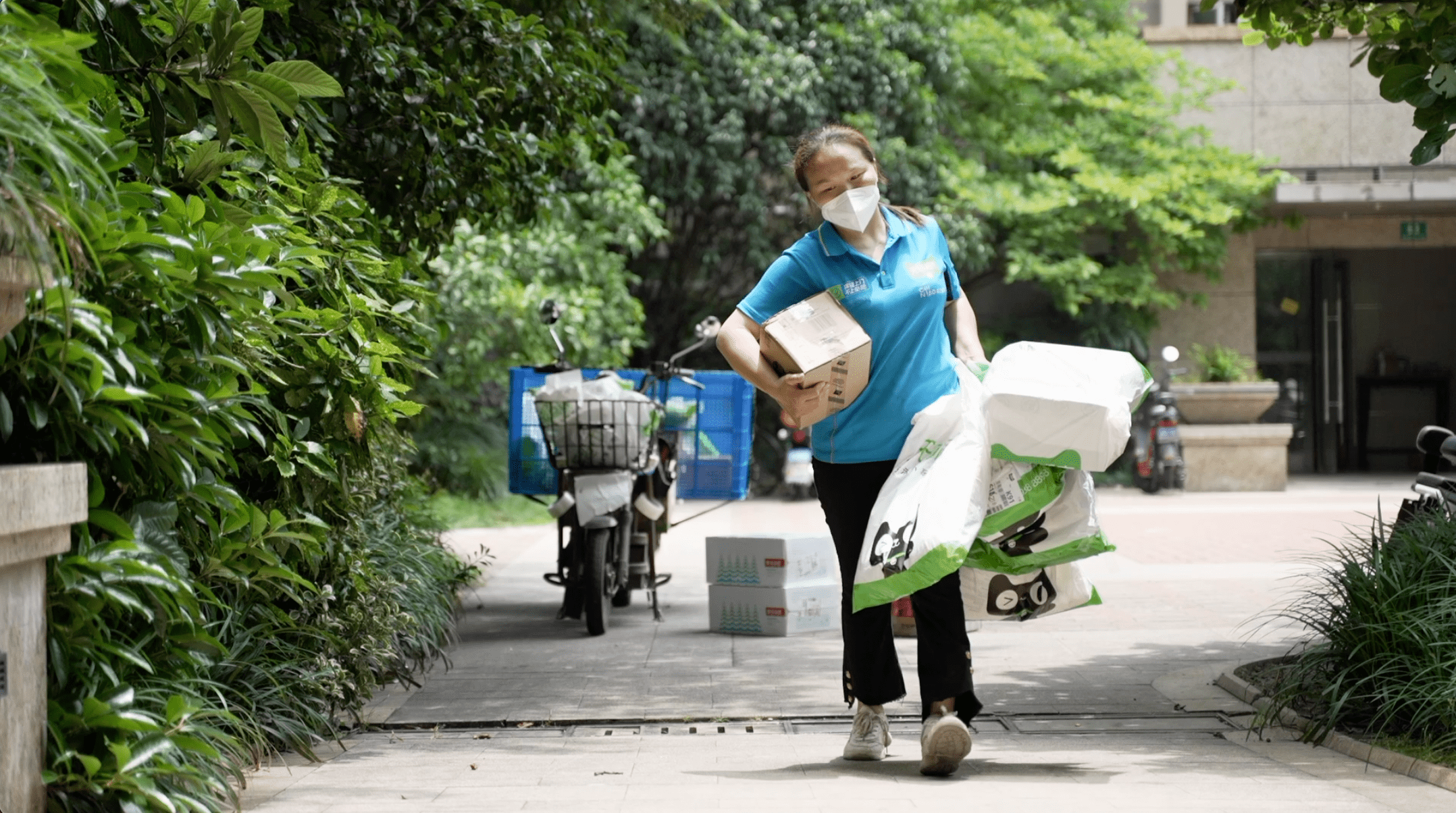 A courier on her way to deliver packages from Tmall Supermarket to residents in Shanghai. Photo credit: Alibaba Group

This week, Alibaba Group’s local services in and around Shanghai picked up the pace after months of lockdown.

In other news, Generation Z consumers are showing their appreciation in style with luxury gift-giving.

But sometimes bigger isn’t best. This is the case for sticky rice dumplings as shoppers choose smaller portions ahead of the Dragon Boat Festival holiday on June 3.

Alibaba’s local services division took steps this week to kickstart business in Shanghai as the city came out of a two-month COVID-19 lockdown.

RT-Mart, Alibaba’s superstore chain, announced most of its offline stores in Shanghai have reopened, with 18 out of 25 stores resuming their one-hour delivery services.

This week, couriers from Alibaba’s on-demand delivery service Ele.me could be seen crossing the Huangpu River by ferry to deliver goods to the other side of the city.

Freshippo, Alibaba’s grocery chain, announced that it would host in-store night markets across China to boost consumption on a broader scale.

Consumers can find a wide selection of ready-to-cook street food, including crayfish, fresh beer and stinky tofu at Freshippo stores, have them cooked on the spot, and eat them in the stores’ dining areas.

Adults in their twenties and early thirties are the biggest buyers of luxury items as gifts for others, data released this week by Alibaba’s upmarket B2C platform shows.

For young consumers, giving quality gifts is a way for them to express love and appreciation. Some of their favorite customized luxury gifts are Montblanc’s PIX Black Ballpoint Pen, Qeelin’s Wulu collection inspired by the Chinese gourd, and Vera Wang Wedgewood’s toasting flutes.

Consumers Get A Taste For Low-Calorie Dumplings

Families mark the traditional Chinese holiday by gathering together and enjoying tasty sticky rice dumplings, also known as “zongzi” in Mandarin, wrapped in bamboo leaves with sweet and savory fillings.

This year, tables will be less crowded, reports from dumpling brand Wufangzhai show. Its 50g zongzi, which is a quarter the size of its standard products, have become a big hit as shoppers stock up ahead of June 3.

Dumpling sales on the brand’s Tmall flagship store reached RMB24 million ($3.6 million) between May 20 and 22, a 310% increase year-over-year.

Alibaba Looks To Boost Liquidity for SMEs This 6.18

Alibaba Group platforms is processing payments faster during this year’s 6.18 Mid-Year Shopping Festival as it works to improve liquidity for merchants during the pandemic.

Presales for the annual shopping event started on May 26, kicking off a month-long series of promotional activities from vouchers to discounts across Alibaba’s ecosystem.

“Once we are able to receive payments sooner, we can pay our suppliers early and stabilize the supply chain,” Youngpu Huang, founder of domestic coffee brand Yongpu Coffee, told Alizila.

In the May presale period, merchants will receive roughly RMB10 billion ($1.5 billion) in deposits made by consumers to secure their orders. Once shipping starts between June 1 and June 30, the remaining balance of up to RMB100 billion will be sent to businesses.

Autonomous robots developed by Alibaba Group delivered more than 10 million parcels as of March 31, according to the latest company earnings report.

Over 500 electric driverless robots, dubbed Xiaomanlv or “little donkeys” in Mandarin, have been making deliveries since September 2020 at 200 university campuses in China, where they take Cainiao Post parcels the final mile.

“The biggest advantage that driverless robots have is their reliability, and their cost advantage will come into full play when they achieve economy of scale,” said Hu Changqing, who led the operation team for Xiaomanlv at Cainiao, Alibaba’s logistics network.