Alibaba’s 11.11 Just Set a Record, But It’s Looking Beyond Numbers 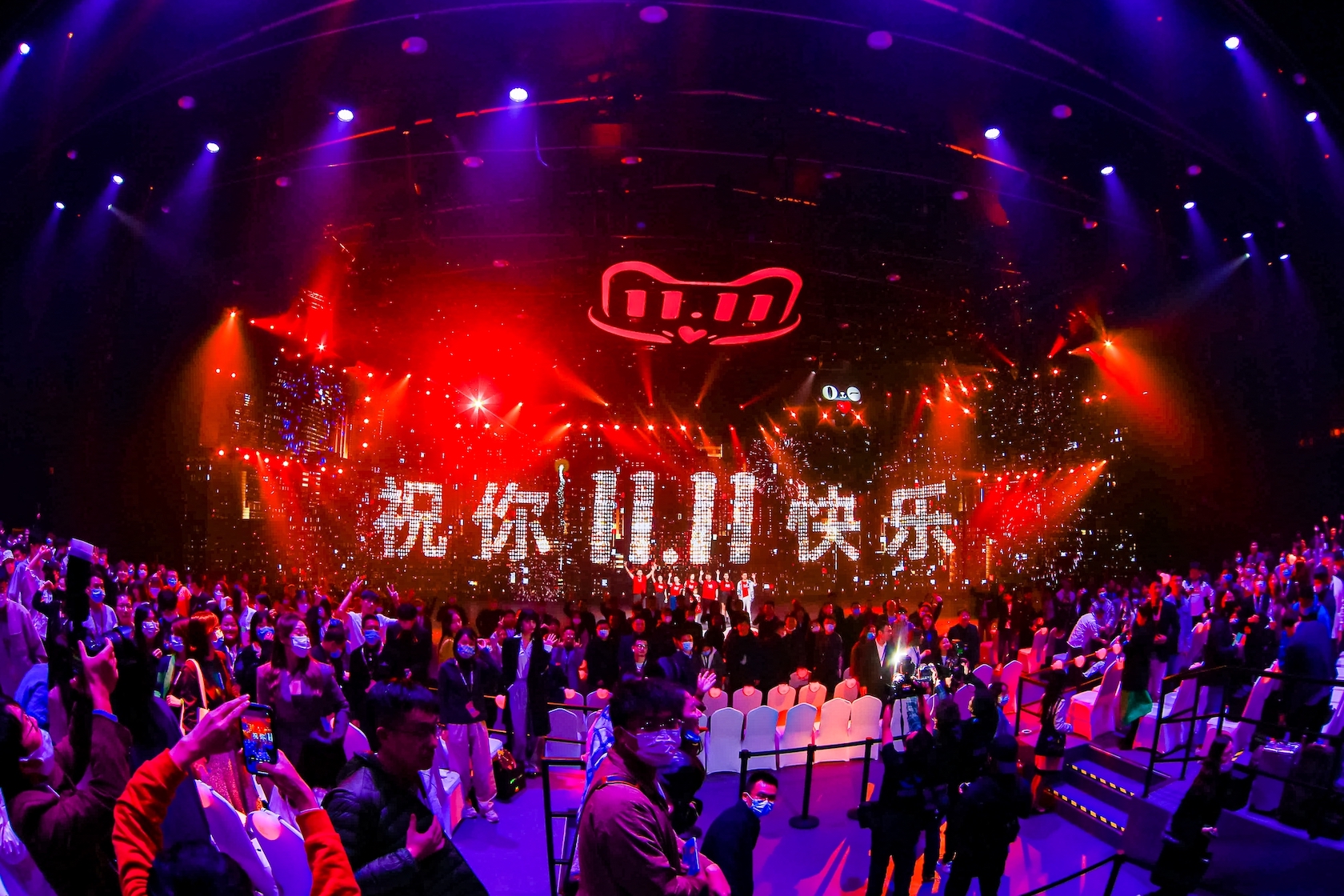 Alibaba's 11-day shopping spree was by far the largest edition of the event to date. Photo credit: Alibaba Group

Alibaba Group’s 11.11 Global Shopping Festival has hit a new high, closing out the event this week with US$84.54 billion in gross merchandise volume.

Alibaba’s two-week shopping blitz already dwarfs all other retail events on earth, but this year was by far its largest edition to date, bringing together at least 900 million Chinese consumers and 290,000 brands.

The pandemic has brought unprecedented challenges to brands and retailers but also accelerated their digital transformation, as exemplified in brands’ consumer engagement strategies during this year’s 11.11, said Alibaba Group President Michael Evans.

“The e-commerce environment continues to be very vibrant,” Evans said. “China remains an incredibly important market for brands to find growth today but also for growth in the future.”

As 11.11 marks its 13th year, success metrics are shifting. GMV is no longer the only bellwether of achievement but a figure to be considered alongside sustainability and inclusivity targets. Likewise, for merchants the shopping festival has evolved from a discount bonanza to encompass retail innovation and brand loyalty.

Alibaba’s Chief Marketing Officer Chris Tung described this as a coming-of-age moment for the festival.

“In the early stages of 11.11, we focused on growth — the same way that parents would focus on a child’s height and strength. But as a child becomes a teenager, the parents shift their focus to nurturing the child’s sense of responsibility: the role he or she plays in society. That is what we’re doing now,” said Tung.

As a child becomes a teenager, the parents shift their focus to nurturing the child’s sense of responsibility. That is what we’re doing now

He stressed that 11.11’s true value goes beyond sales figures to how it can play a part in building the future of consumption. “11.11 is about how to best leverage Alibaba’s latest technology to support brands and merchants in driving sustainable and inclusive growth in more efficient ways,” Tung added.

For the first time, Alibaba put up a dedicated vertical for eco-friendly, low-impact products during the 11.11 sales.

This helped boost the visibility of 500,000 low-impact products from 2,000-plus merchants spanning the food and beverage, home furnishing, electronic appliances and mom-and-baby categories. It even featured fuel-saving cars. Tesla, for example, sold more charging stations for its electric cars within the first minute of 11.11 than it had during the entire festival last year.

To encourage greener consumption, Alibaba offered additional discounts on items in the green vertical, as well as issued RMB100 million worth of “green vouchers” to incentivize sustainable purchases.

According to Alibaba’s figures, more than 2.5 million consumers purchased green products during 11.11.

For each green purchase they make, shoppers can earn “energy points” on Alipay Ant Forest, the e-wallet’s tree-planting mini program. Consumers gained more than 1,000 tons in green energy points this 11.11, which mean 58,838 real trees will be planted by Alipay and its NGO partners on their behalf in China’s most arid regions in need of afforestation.

Meanwhile, used-goods marketplace Idle Fish – “Xianyu” in Mandarin – launched a service that encourages users to recycle unwanted gadgets and electronic appliances by rewarding them with deals on energy-efficient products.

“E-commerce platforms connect with consumers on one end and merchants on the other. They have a natural advantage when it comes to driving green consumption and sustainable practices across the product life cycles and supply chains,” said Jin Min, a professor with the school of environment and natural resources at China’s Renmin University.

By searching “delivery package recycling” on the Taobao and Cainiao apps, users can also check the number of eco-friendly packages they’ve received since last year’s 11.11, as well as the number of times they used old cardboard boxes for shipping at Cainiao Post pick-up points. These actions are tallied into a final score for shoppers to see how much they’ve reduced their carbon footprint over the year.

Cainiao also used e-shipping labels to replace traditional paper sheets for over 1.2 billion parcels, while 15 million parcels shipped from its warehouses were delivered in their original boxes or using biodegradable, plastic-free packaging.

The company said its green logistics push has helped reduce carbon emissions by 18,000 tons this 11.11.

The pandemic has created additional challenges for merchants gearing up for the event. Globally, supply chain backlogs have piled up while ships and airplanes were delayed. Intermittent lockdowns caused brands to lose weeks of production time.

To help brands deliver their goods to consumers in time, Cainiao pre-stocked over 300 million goods from 87 countries and regions in warehouses in China.

The platform also upgraded its network readiness, from outfitting its smart warehouses, rolling out distribution centers and smart lockers, to devising a process that efficiently combines multiple parcels to a single address.

To boost last-mile logistics efficiency, Alibaba deployed 350 of its Xiaomanlv driverless delivery robots at universities and neighborhoods across the country. More than 1 million orders were delivered by robots this 11.11.

For cross-border shoppers in North and Southeast Asia, Cainiao helped merchants on Alibaba’s e-commerce sites Tmall, Taobao and Lazada secure additional cargo space in over 1,350 flights and 150 trucks, as well as 210 sea freight trips with 1,170 containers.

“This is a new starting point for 11.11 technology,” said Cheng. “Previously, we used to push for stronger technology. Today, we’re striving for better technology, technology that makes society better.”

To that end, it has expanded the use of renewable energy and energy-efficient technologies at its data centers. Its largest data center in the northwestern Hebei Province’s Zhangbei County has reduced carbon emissions by nearly 26,000 tons during 11.11, Cheng estimated. Another data center near Hangzhou has one of the world’s largest server clusters submerged in a specialized liquid coolant. This cooling system reduces the data center’s energy consumption by over 70%.

While 11.11 has always been the most important event for brands to reach consumers in China, the sheer diversity of brands taking part made this year’s festival unique.

About two-thirds of the 290,000 merchants participating in 11.11 this year are small and medium-sized enterprises, industrial firms and new brands. About 70,000 of these merchants are joining the annual sales event for the first time.

In the lead-up to the festival, Alibaba’s cross-border marketplace Tmall Global held its annual “Go Global 11.11 Pitch Fest,” a program providing 11.11 as a launchpad to China market entry for overseas SMEs.

Through its low-risk, low-cost Tmall Overseas Fulfillment program, Tmall Global fast-tracked the winning brands from the U.S., U.K. and Ireland to launch on the platform, just in time for this year’s shopping festival.

A daily average of 1.1 million users browsed 11.11 offers using the new senior mode during the event. Their most favorite items included smartphones, down jackets and woolen coats.

“Population aging is not just a looming trend but already a reality in China, so finding ways to help them adapt to the digital world has become increasingly important,” said Shao Xi, the project manager overseeing Taobao’s senior mode. “We want to improve the overall experience for senior users, build brand trust and bring them a reliable, quality experience on Taobao.”

Tmall also kicked off a program to provide a more inclusive shopping experience for people with physical disabilities. Ahead of 11.11, it launched a “One Shoe Program” allowing consumers to buy one shoe for half the price of a pair on partnering brands’ flagship stores, including Sketchers, Reebok and Ecco. Taobao and Tmall recorded more than 80,000 keyword searches for the service during the shopping festival.

About 1.1 million people are expected to benefit from Alibaba’s Goods for Good philanthropic program during this year’s 11.11. The program, launched in 2006, lets merchants pledge a portion of their sales to a charity of their choice. Whenever a consumer buys a Goods for Good product on Taobao, the platform automatically transfers the money to a charity organization.

This 11.11, Alibaba has donated an extra RMB1 (US$0.16) for each purchase shoppers share on social media. A dedicated section on Alibaba’s platforms also featured merchants who have made the most donations via the program, boosting visibility for their stores and products.

As part of its push for greater social inclusivity, the company also collaborated with more platforms and social sites outside its ecosystem. For the first time, Taobao shoppers were able to make purchases with UnionPay as a payment option. The company’s platforms Youku, Damai, Ele.me and Kaola have activated WeChat Pay to process transactions, while Taobao Deals and Idle Fish are applying to open mini-programs on WeChat.

Smaller Cities on the Rise

Penetration in lower-tier cities further increased. According to Bain’s report, this year’s 11.11 will see more first-time 11.11 participants from Tier 3, 4 and 5 cities than from larger cities.

Lower-tier cities in China are the next big drivers of growth, Alibaba market data shows. When 11.11 sales opened on Nov. 1-3, spending in lower-tier cities and rural areas increased by nearly 25% year-over-year. The number of luxury goods buyers in smaller cities also grew by nearly 50%.

We can’t forget about the shoppers from nearly 400 different cities who placed orders on Tmall’s luxury platform either. In the first hour alone, nearly 1 million people browsed luxury products. The top 30 locations with the fastest growth in luxury spending were all lower-tier cities.

“When you think about new user penetration for most of 11.11’s lifetime of success, it was grown through Tier 1 and Tier 2 cities, individuals with higher disposable incomes,” said James Yang, partner at Bain & Co. But today, megacities like Shanghai and Beijing offer less headroom to grow than China’s relatively untapped smaller cities.

“Last year, [11.11] saw a really big spike in lower-tier cities, including in Tier 3, 4 and 5 cities and rural areas, potentially because of post-covid influence as well,” Yang added. “This year was another watershed moment.”

“That is a big change — swinging to the other side of the fence — and I think that is going to continue for several years to come.”

Editor’s note, Nov. 12, 2021: This story was updated with additional figures from Alibaba Group on the results of its sustainable push this 11.11.